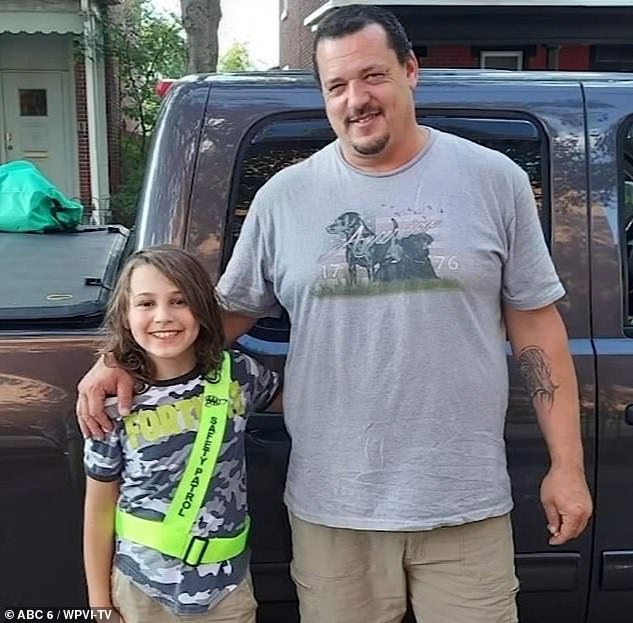 A 10-year-old boy has opened up about how ‘scared and shaking’ when he ducked into a local shop to escape a woman who was following him after recalling how his father taught him to find an adult if he was ever in trouble.

Sammy Green, a fourth grader from Pottstown, Pennsylvania, was walking home from school last Friday when a woman tried to lure him away by offering to buy him food from a convenience store.

‘She was talking about like, “I’m going to Wawa. Are you going to Wawa? What would you get from Wawa?”‘ the boy told Good Morning America. ‘And she was like, “Where’s your family at?”‘

Sammy Green, 10, from Pottstown, Pennsylvania, escaped a woman who was following him after remembering how his father, Sam Green, taught him to find an adult if he was in trouble 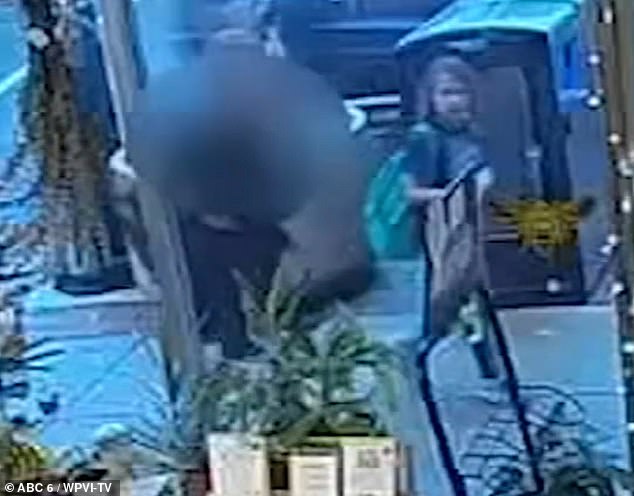 The fourth grader was walking home from school last Friday when a stranger started walking with him. The woman offered to buy him food and claimed to know his family 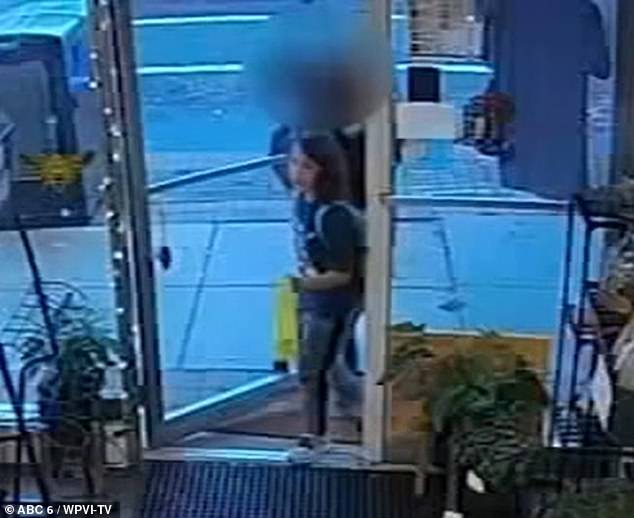 Surveillance footage shows the woman following him right before he ducked into Dani Bee Funky, his favorite neighborhood store

Sammy explained that he knew something was off about their interaction and started to feel uncomfortable.

‘I was scared and shaking, so I was thinking something really fast,’ he recalled.

That’s when he remembered what his father taught him: ‘If you’re getting followed, just don’t trust them. Just act casual and go by any adult.’

Sammy hightailed it into Dani Bee Funky, his favorite shop in the neighborhood.

The stranger lurked outside the door as he headed to the counter and whispered something to the cashier, 17-year-old Hannah Daniels 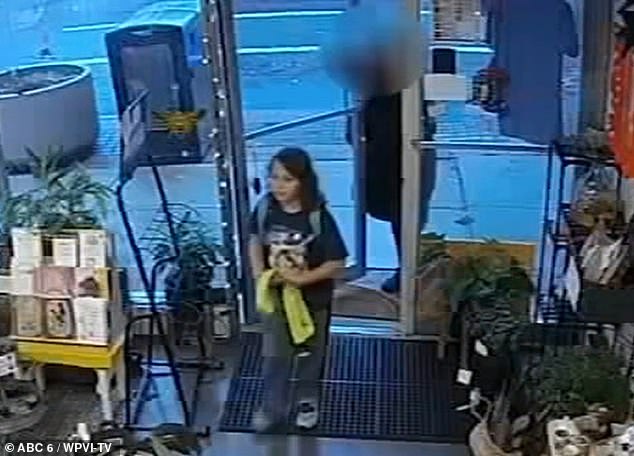 The woman held the door open as he walked inside the shop, but she didn’t follow him in 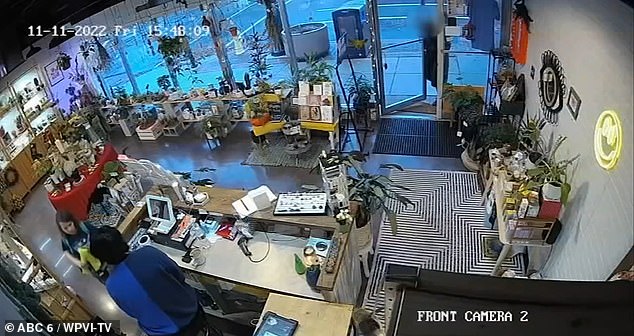 The stranger continued to lurk outside as he headed to the counter and asked the cashier, 17-year-old Hannah Daniels, to pretend to be his mother because he was being followed

Daniels told GMA that she initially thought the boy was with his mother before she realized what was happening.

‘I just thought of a regular interaction with a mother and [her] son,’ she said. ‘But the woman stood in the doorway, kind of hanging there, and I could tell she wasn’t coherent.’

Surveillance footage from the incident shows a woman walking alongside Sammy on the sidewalk, just moments before he entered the store.

The woman continued to hold the door open as he walked up to Daniels and whispered his plan. 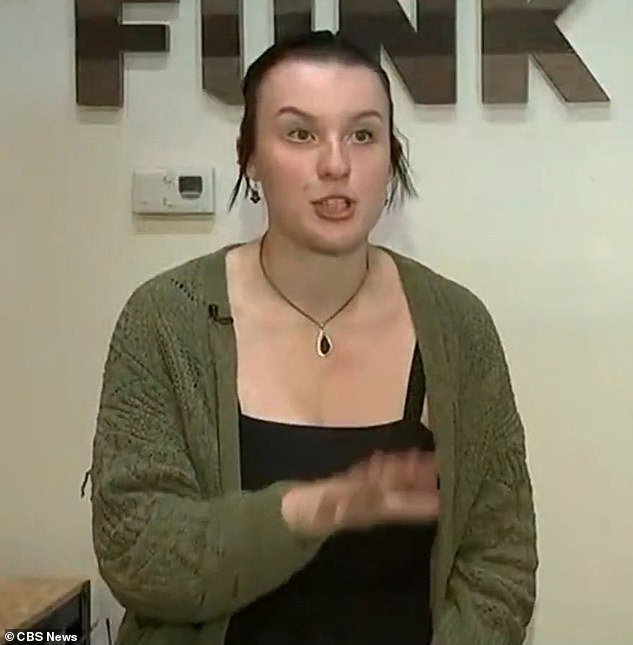 Speaking with CBS Philadelphia, Daniels recalled how she told Sammy to wait in the back while she dealt with the woman, but he refused to leave her side 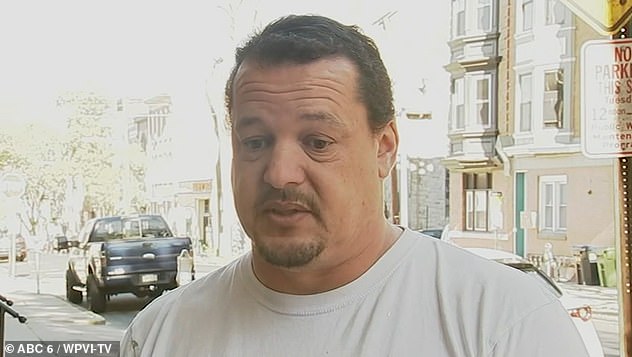 Daniels acted quickly and put herself between Sammy and the woman, who was still holding the door open.

Speaking with CBS Philadelphia about the terrifying encounter, the teenage cashier recalled how she told Sammy to wait in the back while she dealt with the woman, but he refused to leave her side.

Daniels calmly walked over to the open door, pulled it closed, and locked it. That was when the woman finally left.

Sammy’s father, Sam Green, has been candid about how difficult it was to watch the surveillance footage of his son being followed.

‘I cried every time I saw it,’ he told WPVI. 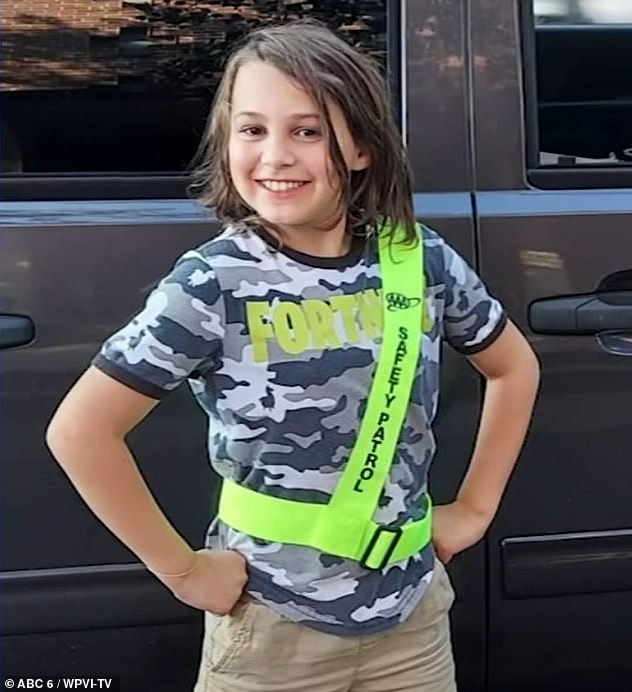 Speaking with Good Morning America about the terrifying incident, Sammy recalled how he was ‘scared and shaking’ when he made the quick decision to walk into the store to get help 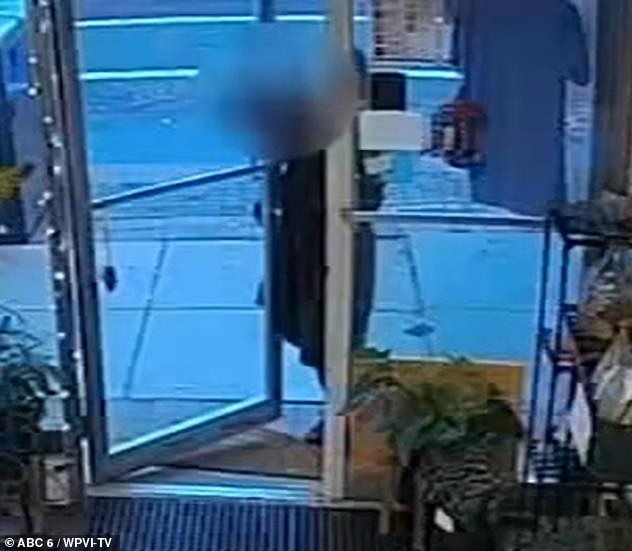 The family is not pressing charges against the woman, who has been referred for mental health help after being located by the Pottstown Police Department

Sammy and Daniels are both being praised for thwarting what could have been a possible kidnapping that day.

‘I’m just so proud of my son for doing what he did,’ Green told GMA.

Sammy now has a family friend walk him home from school following the scare.

The Pottstown Police Department located the woman over the weekend, and she has been referred for mental health help.

The family is not pressing charges, but Green hopes his family’s story will encourage other parents to talk to their children about what they should do if they are ever approached by a stranger.

‘Think of every scenario and make sure that children know and also practice it,’ the dad told CBS Philadelphia . ‘Practice your situations and scenarios just like fire drills.’