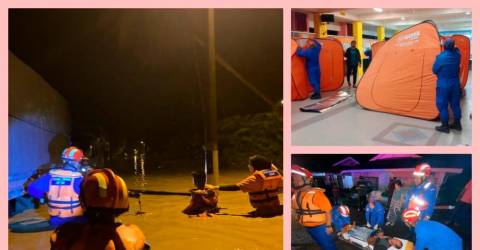 ALOR SETAR: Three relief centres (PPS) have been opened in Kedah last night to accommodate 167 people from 51 families who were evacuated due to floods in the Padang Terap and Kubang Pasu districts.

They are at Sekolah Kebangsaan (SK) Tualak, which now accommodates 43 people (15 families) and SK Perik (33 people from eight families), he said in a statement today.

He said continuous rain since 5 pm yesterday resulted in the water in Sungai Janing to rise and caused flooding in Kampung Perik, Kampung Labi and Kampung Bendang Raja.

In the Kubang Pasu district, the relief centre at SK Binjai was opened at 10.30 pm yesterday to accommodate 91 people from 28 families who were evacuated from Kampung Telok, Kampung Bendang Dalam and Kampung Tanjung. – Bernama