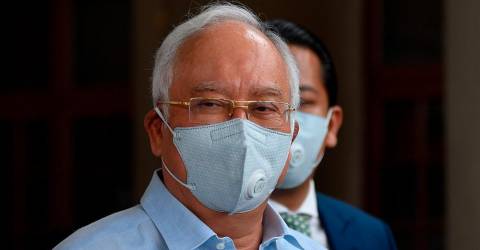 KUALA LUMPUR: Datuk Seri Najib Abdul Razak(pix) has claimed that the US$8 billion civil suit filed against him by 1Malaysia Development Berhad (1MDB) and its four subsidiaries is an abuse of the court process as the names of the actual wrongdoers behind the massive loss suffered by the sovereign wealth fund were removed from its legal action.

The former premier said the action by 1MDB and its four subsidiaries caused suspicion and that it was disingenuous on their part in filing the suit by retaining his name as one of the defendants.

“It is apparent from the amended writ summons that the wrongdoers that were initially named were removed. This casts suspicion and disingenuous on the part of the plaintiffs in the filing of this suit, thus amount to abuse of process,” claimed Najib.

However, Najib, 68, did not state the names of the defendants, who were dropped from the suit.

Najib said this in his statement of defence filed on March 28 in response to the 1MDB’s US$8 billion civil suit filed against him and seven others over its financial loss due to alleged power abuse and breach of fiduciary duties.

The Pekan Member of Parliament also pointed out that the statement of defence was filed without prejudice to his right to file further interlocutory applications, such as to amend the defence or to strike out the whole suit.

“At this juncture, this statement of defence is also filed without prejudice to the first defendant’s right to remain silent in relation to the ongoing criminal trial (1MDB),” he said.

As of today, Ismee, Shahrol Azral, Mohd Hazem, and Azmi had also testified as prosecution witnesses in the ongoing criminal trial against the former prime minister in the RM2.3 billion 1MDB corruption case.

The US$8 billion suit is one of the 22 civil suits filed to claim over US$23 billion on behalf of 1MDB and its former subsidiary SRC International Sdn Bhd against several individuals allegedly involved in the financial scandal.-Bernama