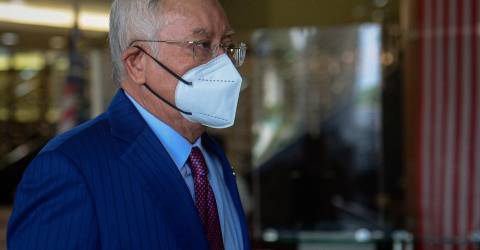 KUALA LUMPUR: Former Chief Secretary to the Government Tan Sri Mohd Sidek Hassan told the High Court here today that according to his understanding, strategic investment company 1Malaysia Development Berhad (1MDB) was set up as a political fund for the ruling party then, Barisan Nasional (BN).

Mohd Sidek, 71, said as such, he had never asked former prime minister Datuk Seri Najib Abdul Razak(pix) or any party in 1MDB about the problems in the company.

He said the issues that troubled 1MDB were only known to him through the mass media such as newspapers and the Internet, adding that he was aware that they were related to allegations of misuse of funds.

“I was also aware from newspaper reports that investigations on 1MDB were being conducted by local agencies such as the Malaysian Anti-Corruption Commission (MACC), but I was never briefed or given further details on them.

“I can confirm that Datuk Seri Najib, as prime minister (then) had never informed me of issues in 1MDB, although I had been appointed as a member of the 1MDB Board of Advisors.

“I had also never asked Datuk Seri Najib why there was no 1MDB Board of Advisors meetings held throughout my time as a member and (why) no 1MDB representatives had reported to me on operations and investments made by the company,” he said.

Mohd Sidek said when reading his witness statement during examination-in-chief by Deputy Public Prosecutor Mohamad Mustaffa P Kunyalam in Najib’s trial over the misappropriation of RM2.3 billion in funds from 1MDB.

Meanwhile, the 19th prosecution witness said he was of the opinion that his appointment as a member of the 1MDB Board of Advisors was only to supplement his income (as chief secretary to the government), which he added that according to Najib, was considered low.

On his appointment as a member of the 1MDB Advisory Board, Mohd Sidek said it was made official through a letter issued by Najib and dated August 30, 2012.

According to Mohd Sidek, he received an allowance of RM30,000 per month during his initial tenure as a member of the 1MDB Advisory Board.

“After I retired as chief secretary to the government, I was still receiving an allowance of RM10,000 per month until I no longer held this position in June 2015,” he said.

Mohd Sidek said on June 2, 2016, he received a letter from the 1MDB chief executive officer Arul Kanda Kandasamy that 1MDB Advisory Board had been dissolved.