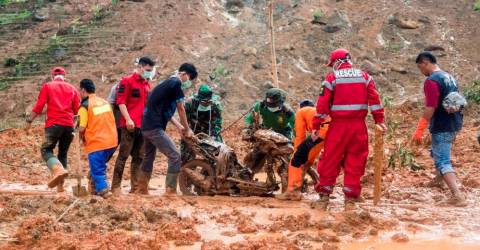 JAKARTA: Twenty miners have been buried after landslides occurred in a traditional gold mine in Indonesia’s West Kalimantan province, a rescue operation chief said on Saturday.

The incident took place at the Kinande village of Bengkayang district on Thursday night, but the information of the incident was received by the rescuers of the provincial search and rescue office on Friday night, said Eryk Subaryanto, head of the operational unit of the office.

“We got the information on Friday night, and immediately deployed our personnel to the scene,“ he told Xinhua via phone.

The rescue operation was hampered by the heavy downpours over the past few days, the remote location of the mine and poor communication facilities there, said the official.

Military personnel, local disaster management and mitigation agency personnel and villagers are also involved in the search and rescue mission in the mine area, he added. – Bernama