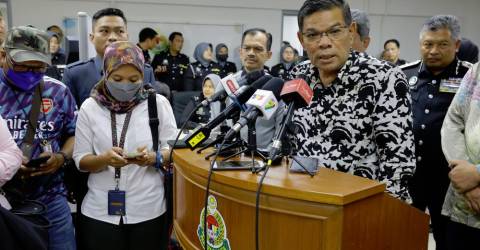 These offices will be open from 8 am to 12.30 pm to address congestion due to the increasing number of applications and renewals of the Malaysian International Passport (PMA), he said.

“All these offices will continue to operate until the congestion issue is under control. This is our commitment. This initiative is sensible and innovative,” he told reporters after opening the Kuala Lumpur International Airport (KLIA) Passport Office here today.

Saifuddin also announced the extension of the operating hours of the Immigration offices at the Urban Transformation Centre (UTC) to 7 pm on weekdays and 5 pm on Saturdays and Sundays, except in Johor, Kedah, Kelantan and Terengganu, which are open on Fridays and Saturdays.

Saifuddin said the reopening of national borders on April 1 last year saw a 25 per cent increase in the issuance of passports, meaning 2.58 million passports were issued compared to 2.01 million in 2019.

Saifuddin said the KLIA passport office could benefit 3.4 million local residents and its surrounding areas like Seremban and Port Dickson in Negeri Sembilan

“To date, the passport office has issued a total of 182 passports since its operation on Dec 16,” he said.

“JIM (the Immigration Department) will continue to monitor the response to this office before we plan to open a similar office at Kota Kinabalu Airport in Sabah in the future,“ he said. – Bernama