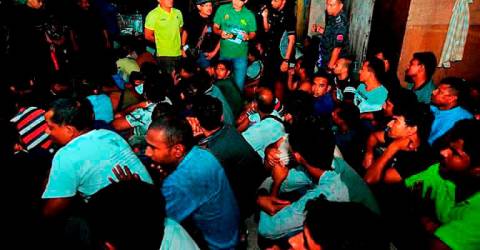 LAHAD DATU: Twenty-two illegal immigrants aged between 20 and 50 were detained during an integrated operation carried out by the Eastern Sabah Security Command (ESSCom) in the district from Dec 16 to 18.

“Throughout the operation, 548 individuals and 290 houses and premises were checked. The illegal immigrants were detained under Section 6(1)(c) Immigration Act 1959/63 and National Registration Act 1959 before being deported to their country of origin,” he said in a statement.

“We need to carry out such operations regularly to ensure the safety and security of the community as well as safeguard the socio-economy of the people,“ he said.

He also urged the people to channel information about illegal activities in the ESSZone to the ESSCom Operation Centre at 089-863181 or WhatsApp 011-63311072.-Bernama