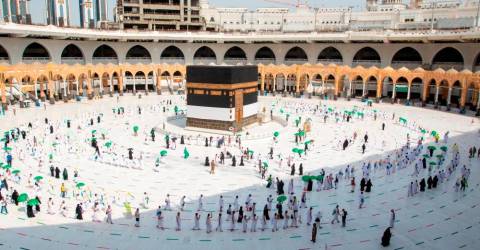 KUALA LUMPUR: Express Rail Link Sdn Bhd (ERL) will be sending 25 of its staff to Saudi Arabia to support the operations of the Al Mashaaer Al Mugaddasah Metro Line (Makkah Metro) in conjunction with the haj season this year.

She said this was the result of the collaboration with China Railway Construction Corporation (CRCC) which was appointed by the Saudi Arabian government to operate the Makkah Metro line.

“ERL is honoured to be given the trust once again by CRCC to provide experienced and competent staff (to support the operations of the Makkah Metro) for the next three years until 2024.

“However, unlike previous years, they will face new challenges in carrying out their duties this time as the pandemic is not over yet,” she said at the sending-off ceremony of ERL staff to support the operations of the Makkah Metro for the 2022 haj season, at KL Sentral today.

The 25 ERL employees will be seconded for a period of two to three months and the first team will leave next Wednesday followed by the second team on May 20.

They will be providing operational support to the Makkah Metro including station management, platform and waiting room operations, operation control centre and train drivers.

Saudi Arabia had previously announced that it would allow one million pilgrims from within and outside the country to perform the haj pilgrimage this year.-Bernama