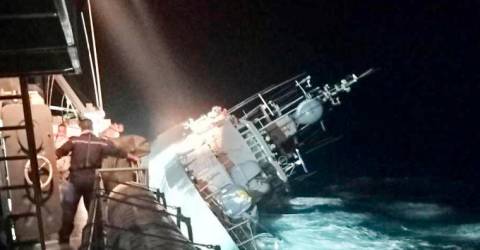 ISTANBUL: At least 31 of the crew members of a warship are missing after a Royal Thai Navy corvette sank on Sunday night in the Gulf of Thailand reported Anadolu.

A massive rescue operation involving warships and helicopters has been launched in search of the crew members of HTMS Sukhothai warship which sank at around 11:30 pm (1630GMT Monday) on Sunday, off Prachuap Khiri Khan province, south of the capital Bangkok.

The corvette had suffered a power failure and subsequent flooding before it sank, some 20 nautical miles (37 nautical kilometres) off the coast of the Bang Saphan district in the central Thai province.

It added that 75 crew members were rescued of whom 11 are being treated while a search for another 31 is still going on.-Bernama