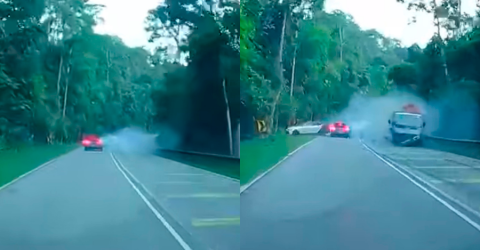 It seems like there have been frequent road accidents lately after spending a year plus in lockdown. Just yesterday, a road accident involving a few vehicles took place at Jalan Ulu Yam.

Around 8am on Sunday, October 10, a dashcam video showed a driver of a Mitsubishi Lancer trying to overtake another car in front of it before colliding with a lorry that came from the opposite direction.

The Mitsubishi Lancer driver tried to overtake the Perodua Bezza and the Volkswagen couldn’t stop in time to avoid the collision.

Based on reports, a total of four people sustained injuries from the accident. The driver of the Perodua Bezza sustained a broken shoulder and a broken leg.

The passengers in the same car were injured with one of them sustaining a broken neck too. They are currently being treated at Selayang Hospital.

The 51-year-old driver sustained wounds to their leg. Miraculously, the drivers in the Mitsubishi Lancer and Volkswagen escaped without injuries.

According to Azman, all parties have come forward to lodge a police report except for those in the Perodua Bezza because they are still receiving treatment in the hospital.

The case is being investigated under Section 43 (1) of the Road Transport Act 1987.

While it’s tempting to drive fast on what seems to be an empty stretch of road, it’s prudent to observe some patience while driving because it’s not worth it to get into a road accident especially during an ongoing pandemic.