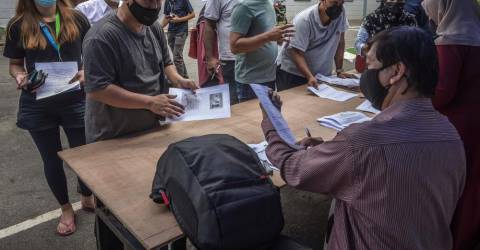 KUALA LUMPUR: A total of 29,643 or 97.3 per cent of the 30,461 household heads who registered at the temporary relief centres (PPS) during the first wave of floods late last year have received the compassionate cash aid (BWI) up to today.

The National Disaster Management Agency (NADMA) in a statement said the BWI payment in Perak, Terengganu, Kuala Lumpur, Melaka, Negeri Sembilan and Kelantan had been made.

It added that the BWI distribution in Pahang and Selangor had reached 97.1 per cent and 97 per cent, respectively.

Meanwhile, 118,837 household heads who had registered are eligible to receive the same aid, comprising 105,134 affected by the first wave of floods and 13,703, by the second wave.

NADMA also stated that for the aid of basic necessities (BBKA), 7,372 (9.1 per cent) household heads out of the 80,726 registered had received the payment, with Melaka being the first state achieving 100 per cent in this aid distribution followed by the Federal Territory of Kuala Lumpur with 94 per cent.

“For the aid from the Implementation Coordination Unit under the Prime Minister’s Department, for house repairs at a maximum of RM5,000, 13 household heads out of the 439 registered have received it,” added the agency. – Bernama