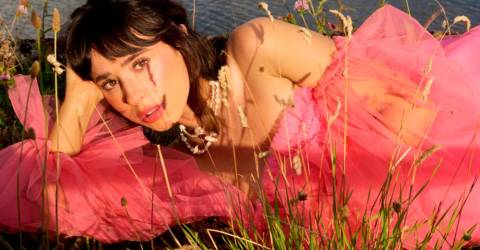 British pop star, Foxes gears up for the release of her third studio album, The Kick

MANY pop music fans may recognise the voice of Louisa Rose Allen, better known as Foxes from the 2012 hit, Clarity. The summer hit by German DJ Zedd catapulted the English singer to mainstream success. Not only was the track a commercial hit, but Clarity also earned Foxes her first Grammy Award.

Soon after winning the Grammy, she went on to release two albums that spawned multiple hits. But while her career was skyrocketing, Foxes was in desperate need of a break.

In fact, the British pop star was getting exhausted from constantly writing, releasing and touring across the globe. Hence, she decided to take a four-year hiatus upon the release of her second album.

During those years, she patiently took time to reflect and hone her craft. Although the wait was long, Foxes is once again ready to be in conversation with the world again.

Her forthcoming album The Kick will mark her return to the industry. The record will hit shelves on Feb 11. Speaking exclusively to theSun, the singer shared and teased details about the upcoming album.

How is it like making a whole album after five long years?

“Really empowering actually. I actually took time away to really kind of get my feet on the ground, to figure out exactly how I wanted to do a third album. And how to do it in the right way. So, yeah, it is a great feeling.

“It was written in lockdown when we were all very isolated. So, yeah, it allowed me to kind of really get inside my head and create this body of work that I am really proud of.”

What is the upcoming record going to sound like this time around?

“Well, there are kind of two sides to the album. I always kind of have that with writing. The album will definitely have songs that are about being in a dark place. But then there are also songs that feel very emotional and very cinematic.

“At the core, I think it comes down to emotion. It is just some of it is a bit dark. But there is a good balance. I like to do that with records.”

Why is the track Sister Ray from the album so special to you?

“Well, Sister Ray has kind of the underlying meaning essentially about a best friend of mine that, unfortunately, I lost a year ago. So really, it is an oath and tribute to her.

“But it is an interesting one because Sister Ray is in my mind a character and a guest. It is an oath to a friend of mine that I used to have some of the most incredible adventures with.

“She just had this incredible wild spirit. So, yeah, I wanted to write a song that would kind of hold that energy forever. So that whenever I listened, I will always be able to feel her energy. But it is also very special to me because during the lockdown it allowed me to escape.

“Writing a dance track like Sister Ray allowed me to feel like I was able to go out again and have fun and see my friends.”

Do you feel like this sense of yearning was a common feeling around the world?

“Oh yeah, absolutely. I think we are social animals. So, I think suddenly to not being able to see our family and friends and our loved one was just very upsetting and difficult. I think for everyone around the world. So yeah, I think it was a joint feeling felt throughout. Hence why the album was therapeutic for me.

“I was kind of dancing inside and I could not get out. And I felt very trapped. I wanted to escape the walls of my house. And by writing this album, I could do so. The more I kept writing, the freer I felt. So, I think it is kind of good timing in a way because we are allowed back out. And we are kind of seeing each other again.

“And now the album is going to come out and I guess we are actually going to be able to be in the wild again.”

What comes next for you?

“Well, I hope to tour. My favourite thing about what I do is touring and playing live music. And meeting different people, music and connecting with others. So, I would love to do a big tour and travel. And also, just keep releasing music.

“I think the biggest thing for me is that I love to get out there and start playing music live again. I would also absolutely love to stop by Malaysia.”

Anything to say to your Malaysian fans?

“I would just like to say, if you are new to listening to my music, keep listening to it! I hope you enjoy it and if you already started listening, thank you from the bottom of my heart for all your support!

“Sending you lots of love, and I think if I get to play some live music over there, I definitely hope to see you.”