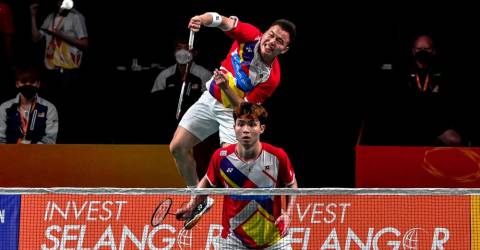 The world number six pair took only 36 minutes to settle the match at Istora Senayan and will meet Leo Indonesian pair Rolly Carnando-Daniel Marthin, in the second round after they came from a game behind to beat Ben Lane-Sean Vendy of England, 10-21, 21-13, 21-12.

In the meantime, Malaysia’s number one men’s singles shuttler, Lee Zii Jia continued his winning momentum since he won the Badminton Asia Championships in the Philippines last month, with a straight-sets victory over Thailand’s Kantaphon Wongcharoen, 21-16, 21-12.

However, veteran shuttler, Liew Daren failed to earn his ticket to the second round as he went down to Lu Guang Zu of China, 16-21, 21-23. — Bernama