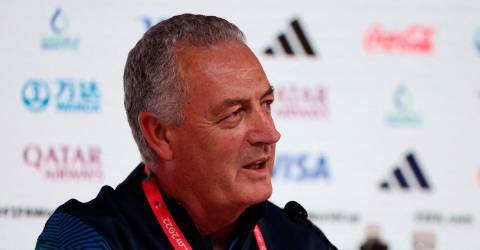 DOHA: Byron Castillo will not be on the pitch when Ecuador meet Qatar in the World Cup opener on Sunday but the defender will be there in spirit as a symbol of the adversity the South American side faced just to get to Doha.

The 44th-ranked Ecuadorians punched their way into the fourth and last spot from arguably the world’s toughest qualifying campaign, overcoming challenges on and off the field that resulted in Castillo being left off coach Gustavo Alfaro’s squad.

The Ecuadorean Football Federation (FEF) decided not to include Castillo after Chile took a claim to the Court of Arbitration for Sport (CAS) that he had been ineligible to play in World Cup qualifying matches because his true nationality was Colombian.

Although the claim was dismissed, the disputes body ruled that Ecuador would lose three points ahead of the 2026 World Cup qualifiers and be fined 100,000 Swiss francs ($106,000) for using a document containing false information.

Not wanting to risk any further legal challenges, Alfaro made the painful decision not to call up Castillo.

“Byron for us is a symbol and he will be with us on the pitch tomorrow even if he is not there.”

The hardships Ecuador faced hardened Alfaro’s men, who he says refused to play the part of victims and instead faced up to the task and moved on.

“We had to go through things that we did not wish to go through but that’s what we had to do,“ said Alfaro. “I told my players it depends how you deal with things; if you want to victimize yourself that’s it you behave like a victim.

“We saw all this as hurdles we had to go through, we never tried to victimize ourselves, we based our work on dreams and our dream was to play this World Cup.”

While Ecuador are favoured to leave Al Bayt Stadium with a victory on Sunday, Alfaro ranks the contest a toss-up.

Qatar cannot match Ecuador for top-flight talent but will try to make up for some of their shortcomings with cohesion from their players having trained and played together for several months in preparation for Sunday. “Qatar is Qatar and they have been preparing for this match for over 12 years,“ said Alfaro. “They’ve been preparing for five, six months playing friendlies that means they are a very good organised and prepared team.” – Reuters