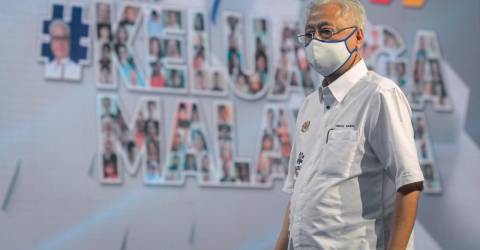 KUALA LUMPUR: The rakyat can learn about the government’s achievements through the 100-Day Aspirasi Keluarga Malaysia or AKM (Malaysian Family Aspirations) Programme which is being held for four days since last Thursday (Dec 9).

Prime Minister Datuk Seri Ismail Sabri Yaakob (pix) said the people should take the opportunity to see for themselves the programmes made available by the government for them, such as Bantuan Aspirasi Kerajaan, career opportunity exhibition, government service counter and many others specially established for the Malaysian Family.

“I understand that the people place high hopes on this government.

“Last Sept 24, I decided that the 100-Day Aspirasi Keluarga Malaysia be gauged based on 50 per cent of a ministry’s core service, minister’s performance assessment (25 per cent) and public perception on minister and ministries (25 per cent),” he said through a post uploaded on his official Facebook today.

Ismail Sabri also said that as a family, it is the responsibility of all parties to work together in any situation.

“It’s like the saying of a poet (Anthony Brandt), Other things may change us, but we start and end with the family, “ he said.

Last Thursday, the prime minister when launching the 100-Day Aspirasi Keluarga Malaysia programme at the Kuala Lumpur Convention Centre (KLCC) here was reported to have said that Cabinet ministers had scored about 90 per cent in their overall performance in the first 100 days of the current administration.

The success, he said, should inspire them to serve with greater commitment instead of becoming arrogant.

The prime minister also said the achievement of the 100-Day Aspirasi Keluarga Malaysia would not end at that point and instead, would be continued with a medium-term plan for six months and long-term targets.