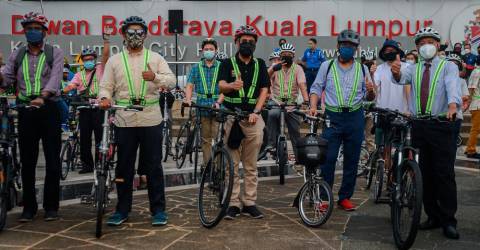 Launched by the ministry’s secretary-general, Datuk Seri Dr Zaini Ujang (pix), the eight-kilometre event was organised in collaboration with the Kuala Lumpur City Hall (DBKL) and had attracted over 100 participants.

Held at Dataran DBKL, the programme was a green initiative to promote a healthy lifestyle among the locals through recreational sports, arts and cultural activities in line with Malaysia’s commitment to reduce carbon emissions and fossil fuel use.

Zaini, when met by the media, said the government through the National Low Carbon Cities Masterplan (NLCCM) intends to ensure the cities in the country can reduce carbon emissions, which is one of the causes of global warming.

“By 2030, all government vehicles, including ministries will use non-fossil fuel-based vehicles. This is our commitment to reducing greenhouse gas emissions,” he said.

Zaini added that the government would also build 10,000 km of river trails along major rivers not only to allow water to flow downstream but also to function as an ecotourism product as well as a recreation area for the public.

Meanwhile, Kuala Lumpur mayor Datuk Seri Mahadi Che Ngah said DBKL would take stern action against road users who misused the blue lane around the capital which are dedicated to cyclists, adding that there are about 5,000 closed-circuit television (CCTV) cameras installed around the capital to monitor the offence.

Mahadi said the blue bicycle lane facility will be expanded to other areas such as Brickfields, Wangsa Maju, Jalan Duta, Ampang and Titiwangsa as an initiative to encourage people to use bicycles to reduce traffic congestion.