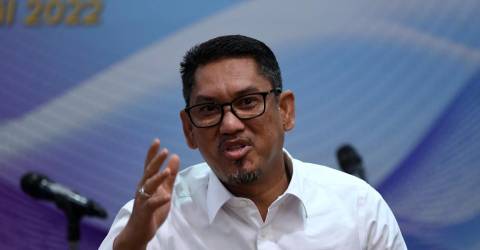 KUALA LUMPUR: Youth and Sports Minister Datuk Seri Ahmad Faizal Azumu(pix) hopes that the national athletes will show off their best performance at the SEA Games in Hanoi, scheduled from May 12 to 23.

He said this was important as the achievements at the SEA Games would be the starting point to continue the winning momentum in two upcoming major games, namely the Commonwealth Games in Birmingham, England from July 28 to Aug 8, and the Asian Games in Hangzhou, China from Sept 10-25.

“When we put on the national jersey, we cannot give our second or third best, we have to give our best performance. For me, even if an athlete can’t win a medal, it is important to train hard and set personal records.

“However, I pray that our athletes will not only shine but also bring home as many gold medals as they can,” he told reporters after a dialogue session and breaking of the fast function at his ministry with the Malaysian Sports Writers Association here last night.

At the same time, Ahmad Faizal said the national contingent should not be too optimistic to set a high target, although Malaysia would be sending a 600-strong contingent to Hanoi. —

He said the exact target on medals and flag bearers of the national contingent would be announced soon, with the handover ceremony expected to be held in the coming weeks.

Commenting on the Commonwealth Games, Ahmad Faizal said he visited Birmingham recently with the National Sports Council and found the preparations of the organisers were at the best level.

In March, Deputy Youth and Sports Minister Datuk Seri Ti Lian Ker announced an initial forecast of a 79-medal haul, including 31 gold at the Hanoi Games.-Bernama