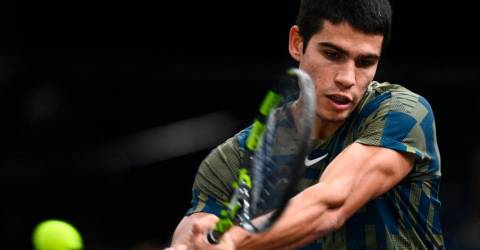 Spanish teenager Alcaraz, hoping to win a third Masters title of the year after previous successes in Miami and Madrid, saw off former world number three Dimitrov 6-1, 6-3 in 72 minutes.

Alcaraz will be confirmed as the year-end world number one before the ATP Finals in Turin later this month if he lifts the trophy this weekend in the French capital.

“It was not his day, he didn’t play at his best, but I played my game,“ said the 19-year-old US Open champion.

Alcaraz will take on Holger Rune for a last-four place after the Dane knocked out seventh seed Andrey Rublev with a 6-4, 7-5 win.

The top seed got off to a rapid start at Bercy Arena, taking nine of the first 10 games to seize total control of the match.

Dimitrov managed to break back in the second set, but Alcaraz broke again in the eighth game and comfortably wrapped up victory.

The 21-time Grand Slam champion, already the winner of a record 38 Masters crowns, will play Lorenzo Musetti for a semi-final berth.

Djokovic stretched his winning run in individual tournaments to 18 matches, dating back to his French Open quarter-final loss to Rafael Nadal in May.

The Wimbledon champion has now won 10 of his 11 meetings with Khachanov — the only defeat coming in the 2018 Paris Masters final.

He edged a tight opening set but powered to victory in the second, reeling off five straight games.

“Khachanov is someone I know really well,“ said Djokovic. “We train a lot, and we played almost 10 times against each other on different surfaces. He beat me four years ago in the final, so I know he likes this surface, he likes these conditions.”

Italian youngster Musetti downed third seed Casper Ruud in three sets to reach his maiden Masters quarter-final where he will come up against Djokovic.

“He was playing really well and I had to play my best tennis to beat him,“ said Musetti.

“I am really happy that all the hard work I am doing keeps improving me. I am really proud of this win.”

Ruud has struggled since losing the US Open final to Alcaraz — having also been the French Open runner-up earlier this year — winning just two of his last six matches.

Felix Auger-Aliassime extended his winning streak to 15 matches as the Canadian ended Gilles Simon’s career with a 6-1, 6-3 success.

The eighth seed is still on track for a fourth successive title and will next play Frances Tiafoe after the American’s 6-3, 7-6 (7/5) win over Alex de Minaur.

Auger-Aliassime and Rublev both qualified for the ATP Finals on Wednesday to complete the eight-man field.

Former world number six Simon had said he would retire after the tournament and the 37-year-old Frenchman bowed out of the sport after surprise wins over Andy Murray and Taylor Fritz earlier this week.

Greek fifth seed Stefanos Tsitsipas saw off another home hope Corentin Moutet 6-3, 7-6 (7/3) to set up a meeting with Tommy Paul after the American who beat Rafael Nadal 24 hours earlier continued his run with a 6-4, 6-4 success over Pablo Carreno Busta. – AFP