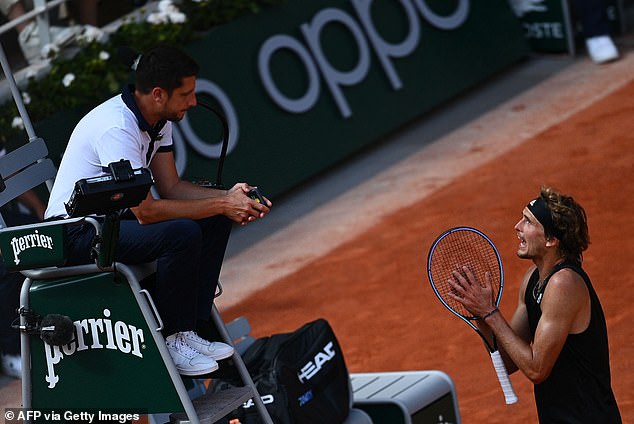 ‘That’s b*******!’ Alexander Zverev involved in fresh umpire row as he fumes at overturned line call… before opponent Stefanos Tsitsipas beats him in five sets to reach the French Open final

A shot by Stefanos Tsitsipas was called out by a line judge deep in the third setHowever, umpire Renaud Lichtenstein checked the mark and overturned the callThe decision meant Tsitspas was given the point, leaving Zverev furiousAfter calming down, the German held his nerve to get his first set on the board Zverev them claimed the fourth set before Tsitsipas prevailed in the deciderIt is the first time a Greek player has made the singles final of a Grand Slam

By Alex Bowmer For Mailonline

Alexander Zverev lost in an enthralling five-set semi-final against Stefanos Tsitsipas at the French Open – and also lost his cool with the umpire for the second round in succession.

The German lost the opening two sets to his younger opponent but was 5-3 up and 15-15 on the Tsitsipas serve when the Greek hit a deep shot that was called out by a line judge – at about the same time Zverev sliced his forehand return into the net.

However, after umpire Renaud Lichtenstein came down to inspect the mark, he overruled the call and gave Tsitsipas the point, leaving Zverev apoplectic as the 24-year-old felt the line judge had made the call before his shot into the net and that he would have made more of an effort on the return if the ball had been called in. 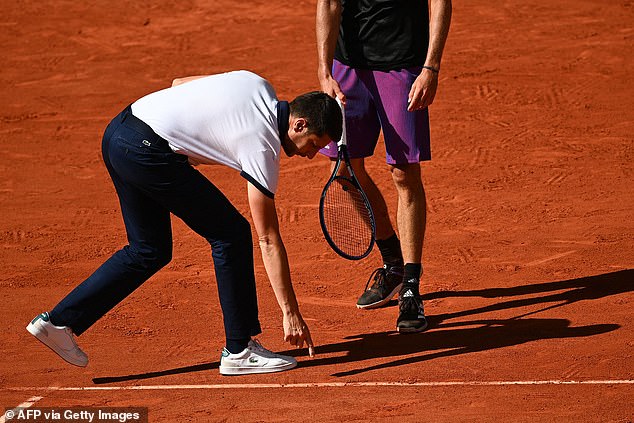 ‘You cannot tell me the call came before the shot,’ Zverev fumed. ‘I hit it in the middle of the racquet. It was a frame shot winner. I hit a squash shot.

‘I could have hit a normal shot. You’re telling me I had no chance of putting that ball into the court? That’s b*******!’

Eventually, Zverev had to admit defeat and return to the baseline and although Tsitsipas held his serve to make his opponent serve for the set, Zverev held his nerve to keep himself in the contest.

The 6’6” man then seized the momentum, winning the fourth set as he threatened a repeat of last year’s US Open semi-final, when he came from two sets down to beat Pablo Carreno Busta.

Zverev saved four match points at 5-2 in the fifth, three with big serves and one with the bravest of drop shots, but Tsitsipas kept his nerve brilliantly to serve it out, holding his arms aloft in delight and relief.