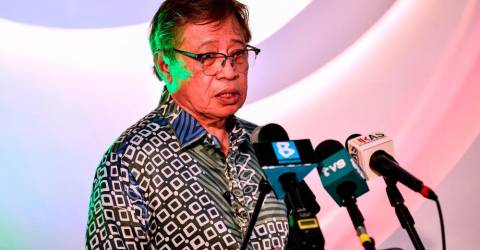 DARO: All potential Gabungan Parti Sarawak (GPS) candidates for the 15th General Election (GE15) will be vetted by the police, the Malaysian Anti-Corruption (MACC) and the Insolvency Department.

GPS chairman Tan Sri Abang Johari Tun Openg said the individuals would only be fielded as candidates once they had passed the vetting process.

“If they pass the vetting process, we will field them as our candidate (GPS). But if they fail, they will not be our candidate,” said Abang Johari, who is also Sarawak Premier, at a press conference after visiting the Daro Sports Complex here today.

Abang Johari who is also the Parti Pesaka Bumiputera Bersatu (PBB) president said GPS was likely to name new and young faces as candidates in the 12 parliamentary seats that the party lost in the 14th General Election (GE).

“Who are the candidates for the 12 seats? Wait for the day we announce our candidates,” he said.

He also expressed his gratitude to the party’s incumbents who had offered not to contest to make way for new faces.

On GPS’s chances of winning all 31 seats in the coming GE15, Abang Johari said it was too early for him to make a prediction.

“However, based on sentiments on the ground, we in GPS have a proven track record with regards to the amendments to the Federal Constitution which gives recognition to the 1963 Malaysia Agreement and the Intergovernmental Committee (IGC) Report,“ he said. – Bernama