By Brian Marks For Dailymail.com

America Ferrera had jubilant news Tuesday when she announced she was pregnant with her second child.

The 35-year-old Superstore star showed off her growing baby bump in a sweet photo shared to Instagram.

She was joined by her son Sebastian, 19 months, and her overjoyed husband Ryan Piers Williams, 38.

America and her family were pictured near El Paso, Texas, and she covered up against the chilly weather in a burgundy ribbed sweater and black leggings with cream-colored snow boots.

The fiercely private actress had Sebastian turned away from the camera as he raised a hand to touch his future sibling.

Great news: America Ferrera, 35, announced she was expecting her second child in a sweet Instagram photo with her husband Ryan Piers Williams, 38, and their son Sebastian, 19 months; pictured in 2016

‘Congratulations!!!! This is the most exciting news ✨❤️,’ wrote Reese Witherspoon, while Judith Light wrote, ‘You are the sweetest family. All love to you all in this New Year.’

‘YAYYYY!!! Congratulations again beauty!!! ❤️❤️❤️,’ wrote Brooklyn Nine-Nine’s Melissa Fumero, who revealed she was expecting a baby of her own last month.

One Day At A Time’s Justina Machado also congratulated her and wished her a happy new year. 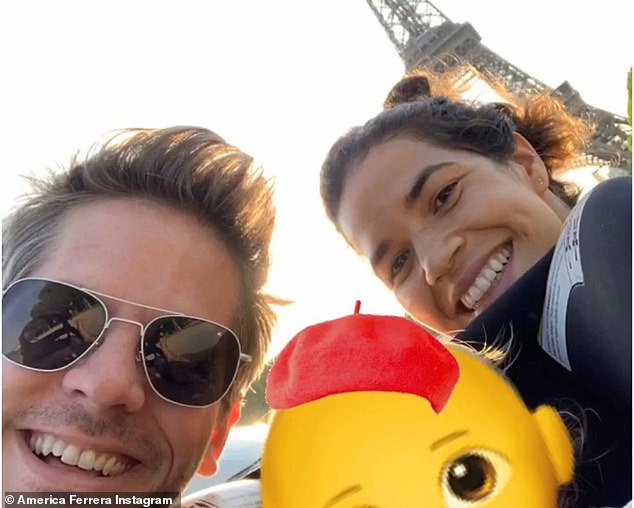 NYE celebration: ‘Welcoming Baby #2 in 2020!’ she wrote in the caption. ‘Happy New Year from our wild & growing bunch’ 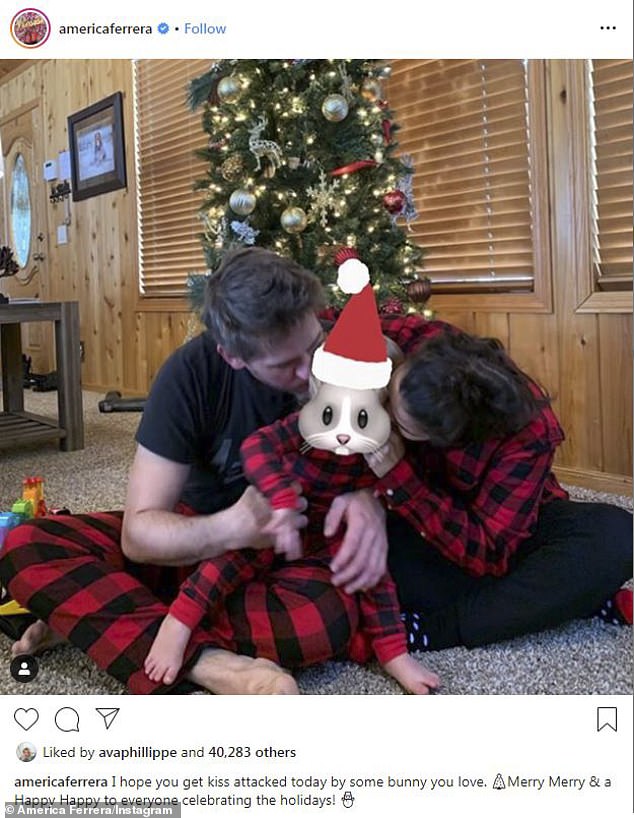 Home life: The post was the second time in a week America showed her son Sebastian, after sharing a sweet Christmas morning photo with the whole family

America’s pregnancy announcement was the second photo in recent days to feature her son Sebastian, whom she usually keeps away from the public eye.

She previously shared a photo with the family in matching red plaid pajamas on Christmas morning as she and Ryan leaned in to kiss Sebastian in front of a Christmas tree.

‘I hope you get kiss attacked today by some bunny you love,’ she captioned the sweet snap. 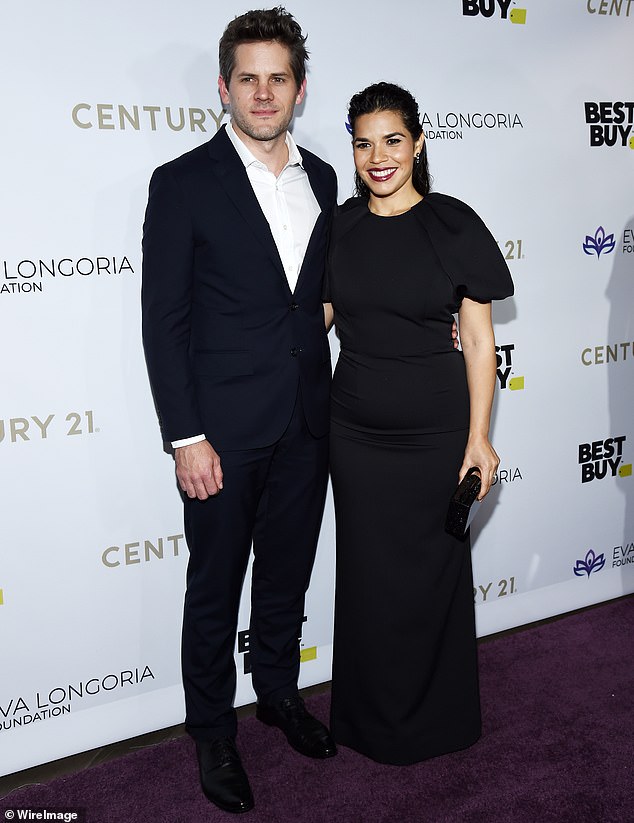 Going strong: America met Ryan, an actor and director, when he cast her in one of his student films at USC. They got engaged in 2010 and married the following year; shown in November

America first met Ryan, an actor and director, when he cast her in one of his student films while both attended the University of Southern California.

This is the second New Year’s Eve Pregnancy announcement for the Real Women Have Curves star, after she announced her first pregnancy at the end of 2017.

She and Ryan welcomed Sebastian in late May of last year. 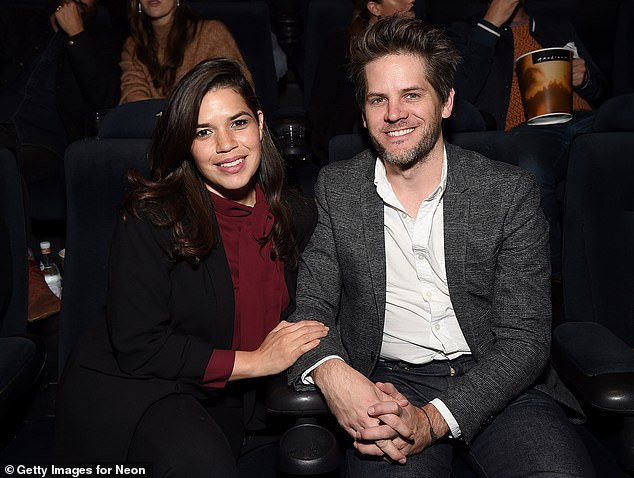 Growing family: The couple welcomed their first son in May 2018; pictured in December 2018

America opened up to Health about her experiences raising a child last year.

‘[Parenthood has] absolutely changed us as individuals,’ she said. ‘It changes what we talk about and what we focus on. For so long, it’s been just the two of us, and we’ve had an amazing life together.’

The actress currently stars on NBC’s hit comedy Superstore, currently in the midst of its fifth season.

The workplace comedy will return to the air after its mid-season hiatus on January 9, 2020. 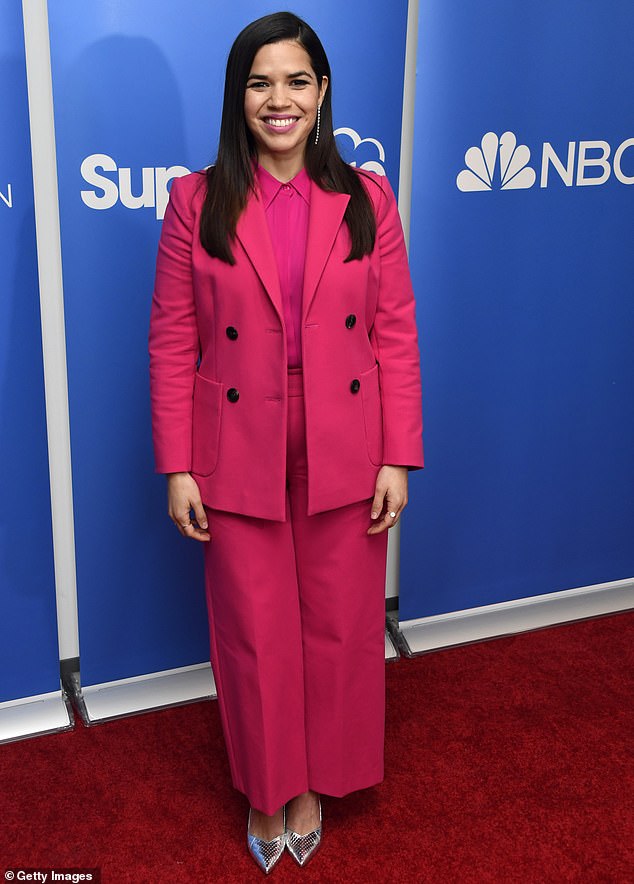 Coming soon: The actress currently stars on NBC’s hit comedy Superstore, currently in the midst of its fifth season; pictured in March