Flaming comet that wiped out an entire civilisation: An extraordinary new book argues the existence of a lost Amazonia in the Americas

By Nick Rennison For The Daily Mail

For more than 20 years, in bestselling books such as Fingerprints Of The Gods, Graham Hancock has argued for the existence of an ancient, lost civilisation, citing archaeological sites around the world to make his case. In America Before, he goes in search of its traces in North and South America.

Today, Amazonia is sparsely populated, but it was not always so. Hancock quotes from the 1540s journal of an explorer on the first expedition to navigate the Amazon.

The men suffered greatly: ‘We were eating nothing but leather, belts and soles of shoes, cooked with herbs.’ Yet they saw ‘great cities’ stretching along the riverbank. Within decades this Amazonian civilisation was gone, destroyed by European diseases.

For more than 20 years, in bestselling books such as Fingerprints Of The Gods, Graham Hancock has argued for the existence of an ancient, lost civilisation, citing archaeological sites around the world to make his case. In America Before, he goes in search of its traces in North and South America (stock image)

But evidence exists of much older settlements there, such as giant earthworks that form perfect geometric shapes. The stones of Rego Grande in Brazil — ‘Amazon’s Stonehenge’ — align with the sun on the winter solstice.

North America, too, has its ancient earthworks. Thousands of man-made mounds lie scattered across the U.S., particularly in the Mississippi river basin. Some were long considered to be natural features of the landscape. As late as 2001, two in Missouri disappeared under a new Walmart.

One of the most spectacular is the undulating 1,350-ft Serpent Mound in Ohio. On the summer solstice the open jaws of the Serpent seem to engulf the setting sun.

Hancock points out deep connections between the spiritual beliefs of the ancient Mississippi Valley and those of ancient Egypt, particularly in their ideas about the soul’s journey after death, which both involve ‘a leap to the sky’ via Orion. The simplest explanation for this, he argues, is that both echo the beliefs of the lost civilisation he has been tracking for a quarter of a century.

Hancock is not claiming the earthworks of Mississippi or the Amazon are the products of that lost civilisation. But he does want us to believe they ‘bear the fingerprints’ of a ‘world-exploring’ culture of prehistoric antiquity. 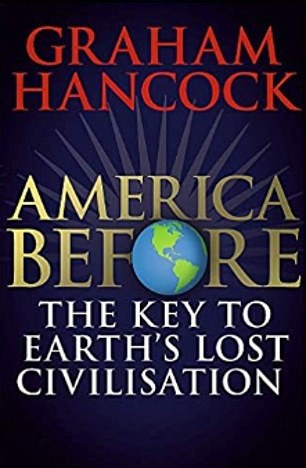 AMERICA BEFORE by Graham Hancock (Coronet £25)

That culture was destroyed about 12,800 years ago when, near the end of the Ice Age, huge fragments of a disintegrating comet fell to earth. The results were devastating, particularly in North America. One archaeologist envisaged ‘hunters sitting around, cooking mammoth haunch over their campfire, when all of a sudden the sky exploded’. Floods, fires and mass extinctions followed.

Hunter-gatherers were not the only victims; so was Hancock’s super-civilisation. Only a few survivors were left to plant the seeds of their culture in the many different parts of the world where they found refuge.

The heart of that lost civilisation, Hancock believes, was in America. He acknowledges that most archaeologists will dismiss his theories as ‘crackpot’ and call him a ‘pseudoscientist’. He has faced such criticism since he first ventured into print.

For general readers, Hancock’s books provide a fascinating, alternative version of prehistory. America Before, detailed and wide-ranging, turns what was myth and legend into a new story of the past.