At 8.30am sharp every day, Conservative Campaign HQ reverberated to the relentless beat of the Eighties hit The Final Countdown by rock band Europe.

Staff had voted for it as their anthem because the lyrics conveyed the message they were pumping out every day: Get Brexit Done. ‘We’re leaving together… It’s the final countdown…’

It was campaign chief Isaac Levido who decided to play the song at full volume.

Until Thursday night, the softly-spoken but straight-talking strategist was barely known outside the Westminster bubble. That’s no longer the case. The scale of the Tory victory can only serve to underline Levido’s growing reputation.

The Tory landslide is a huge personal tribute to Boris Johnson but also to Cummings (pictured outside Downing Street following the election victory), who maintains Remainers are to blame for refusing to accept the referendum result

As the results of the exit poll were announced, his adoring staff began chanting ‘Oh, Isaac Levido…’ in mockery of the tribute once sung about Jeremy Corbyn.

He has run a ruthlessly disciplined campaign while simultaneously motivating his young staffers.

He learned from the best, as a protege of fellow Australian Sir Lynton Crosby, who ran Boris Johnson’s two successful London Mayoral campaigns and delivered the 2015 election for David Cameron.

In May, it was Levido who secured a surprise win in the Australian general election for the Liberal Party’s Scott Morrison. Two months later, he left his girlfriend in Sydney to join the Johnson team at No 10. 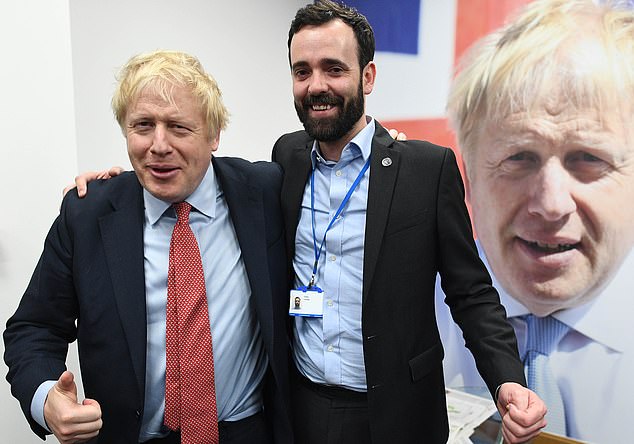 Levido, 35, brought with him two 20-something New Zealanders – Sean Topham and Ben Guerin – who reinvented the Tory social media strategy with a blizzard of short videos, films and publicity stunts.

‘Some preached to the converted. They also found people who were undecided and helped make their minds up for them,’ explained one senior Tory aide.

Typical was their rip-off of a famous scene from Love Actually, the 2003 Richard Curtis Christmas movie, which was viewed by more than 3 million people.

More controversially, the team edited a TV interview with Sir Keir Starmer, Labour’s Brexit spokesman, which made him look dumbfounded by his party’s policy.

The political row, which Levido anticipated, directed more than 5 million people to the video. ‘The film reminded people Labour’s position on Brexit was incoherent and contradictory,’ said the aide.

As Corbyn launched his campaign last month, Levido’s team was punching out a message on Facebook: ‘Corbyn asks whose side are you on? But whose side is Corbyn on?’ It linked to a clip of him refusing to blame Russia for the Salisbury Novichok poisoning.

Levido directed operations from a set of desks known as ‘the god pod’ and reported direct to Johnson. The PM’s first call of the day was from Levido following the team’s strategy meeting at 5.40am.

So, one might ask, where was Dominic Cummings, the hugely controversial mastermind of Vote Leave who joined Johnson’s team as senior advisor in July?

While crucial to the Tory campaign, Cummings opted for a lower profile, aware no doubt of the criticisms levelled at Theresa May’s advisers for their part in the catastrophic 2017 election campaign.

He described Levido as a man ‘100 times better at running campaigns than me’ but Levido would be first to admit he could not have succeeded without Cummings.

Even Labour has admitted that the Tories’ success was down to the catchphrase ‘Get Brexit Done’ – a Cummings creation.

It resonated in the same way as ‘Take Back Control’ in the referendum, which was also down to 48-year-old Cummings (played by Benedict Cumberbatch in the TV drama Brexit: The Uncivil War).

A famously dishevelled and maverick figure, who revels in the title of Disruptor-in-Chief, he’s never been a member of the Tory Party and harbours a healthy disdain for authority. Today, he remains the principal architect of post-Brexit Britain.

The Tory landslide is a huge personal tribute to Boris Johnson but also to Cummings, who maintains Remainers are to blame for refusing to accept the referendum result.

Now he will focus on ensuring that Boris finally delivers it.