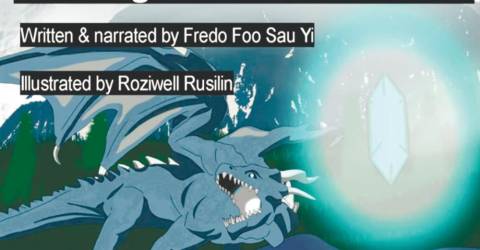 YOU may have seen the Pixar animated feature Raya and the Last Dragon, but did you know that we have our very own dragon-based mythology here in Malaysia?

Seventeen-year-old animator and writer Fredo Foo Sau Yi from Kota Kinabalu, Sabah recently created a short animated film about three princes and a dragon titled The Dragon of Mount Kinabalu which highlights the themes of brotherhood.

Fredo, who is enrolled in Culinary Arts programme at the Keningau Vocational College, wrote the story based on some local folklore.

The young writer also recently participated in the Magic Bridges of Budapest 2021, an international competition and festival of arts, music, vocals, dance, and folklore, where he won the bronze medal for his achievements in animated tales and as a young writer.

“I love to write short stories because it enables me to bring fictional characters I have created (in my mind) to life through writing,” added Fredo.

Fredo wrote the story and his friend, Roziwell Rusilin – a former Construction Technology student from the same college – helped to bring the story to life with his drawings.

“He is an excellent visual artist and he credited as the art director for this project and he received a certificate (for a gold medal) for his contribution, too. He has helped many teachers and students at our college with his illustrations,” said Fredo.

How and when did you develop a passion for animation and storytelling?

“I love writing stories since it allows me to build my own fictional world where I have the power to decide on the plot, characters, setting, and other aspects related to stories.”

Where did you get the idea or inspiration for the story?

“Our school had a project on folklore and my teacher encouraged me to write a cultural story that I could relate to.

“I did some brief research on the internet and discovered several blogs that chronicled the story of a dragon in Mount Kinabalu that guarded a gem and how three princes from China planned to steal it.

“I found the story to be profoundly important to us Sabahan’s since Mount Kinabalu is our great pride and landmark.”

How did you feel when you won the awards?

“I felt happier than ever, and it’s an acknowledgement of my work as well as those who have helped me with it.”

Tell us about the plot for the animated short film.

“[There] are many blogs that chronicle the tales with slightly different versions. The story is about a dragon that guarded a gem in Mount Kinabalu and three princes from China deployed by their father to retrieve the gem, [in order] to decide which one of them should take over the throne.”

What message do you want to convey through the animation?

“When it comes to family, blood is thicker than water, and family, no matter how tough things are, should always be our priority.”

What was the most challenging part of making the animated short?

“It was the voiceover. I struggled with voiceover, particularly in enunciating every single word properly. I know that it wasn’t that perfect yet but I considered it as my first step to more success in the future.”

What was difficult about it?

What is your future plan?

“I plan to write more stories and I would be very happy if my stories make it to the movie theatres.”