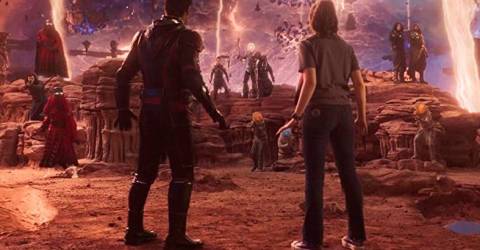 MARVEL Studios has dropped the first trailer for Ant-Man and the Wasp: Quantumania, which will see the return of Paul Rudd and Evangeline Lilly as the titular characters after their last appearance three years ago in Avengers: Endgame.

The trailer reveals that after the world-changing events of Endgame, Rudd’s Scott Lang’s is finally acknowledged as a superhero by the general public – even though they sometimes mistake him for Spider-Man. Unfortunately, his daughter Cassie Lang (Kathryn Newton) creates a device that accidentally sucks him, her and the entire ‘Ant-family’ into the Quantum Realm, where they meet Kang the Conqueror.

Quantumania’s director, Peyton Reed, explained that the film will explore the family dynamics of Scott, Cassie and Lilly’s Hope.

“Cassie is now 18 years old and maybe Scott doesn’t quite know how to relate to her as an adult because he lost those five years because of the events of (Avengers: Infinity War and Endgame),” Reed said.

More importantly, Quantumania will kick off the Marvel Cinematic Universe’s fifth phase of films for the The Multiverse Saga, and the film will introduce Jonathan Majors as Kang, the primary antagonist for the film and the rest of the saga.

“I grew up reading the comics, and I knew the character of Kang the Conqueror, who’s one of the big, big bad characters in the comics, so to be able to put up our heroes against Kang was a huge thing for us. We went big and we also went small,” Peyton Reed revealed.

Majors previously played a different version of Kang called “He Who Remains” in the first season of Disney+’s Loki.

Another confirmed villain in the film, but not shown in the trailer is MODOK, a cybernetically enhanced being with an oversized head.

Ant-Man and the Wasp: Quantumania will release in theatres on Feb 17, 2023.