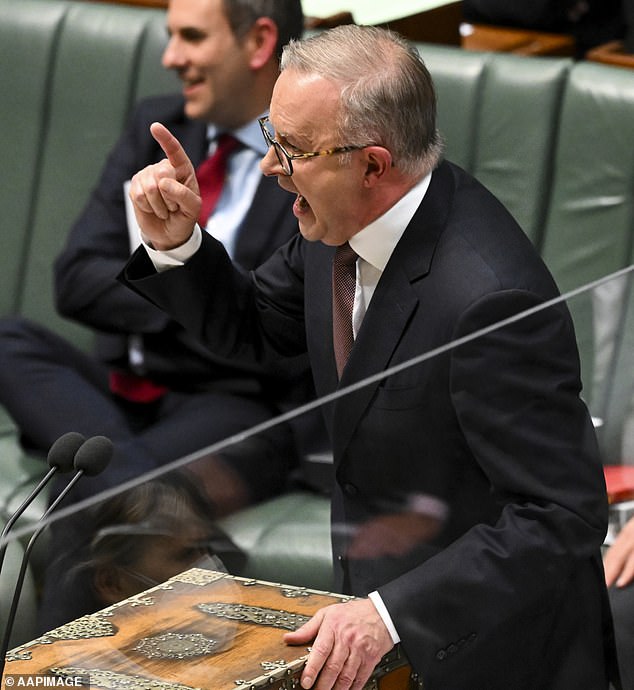 Anthony Albanese has made a basic geography error in Parliament just weeks after he allegedly made a female MP cry while mocking Peter Dutton for a similar mistake.

And just minutes later, the prime minister compounded his mistake by resurrecting his sledge on Mr Dutton – apparently not realising the irony.

One of them was ‘Crestwood World of Learning in Queanbeyan, ACT’, where he said the coming changes were well received.

However, Queanbeyan is actually just over the border in NSW, not in the ACT, despite being just next door – as anyone who works in Canberra should know.

Unlike when he blasted Mr Dutton for a geography gaffe about his home state of Queensland, no one pulled Mr Albanese up on his error.

Later in Question Time, Mr Albanese referenced his October 27 sledge of the opposition leader, in response to a question about rising power prices for the Alex Surf Life Saving Club in Alexandra Headland, Queensland.

‘I was very pleased to be there and to meet the heads of the Alex Surf Life Saving Club, and were…’ he said, before theatrically trailing off.

‘No, I was at Alexandra Heads Surf Life Saving Club and we did a press conference there.

Mr Albanese’s Yeppoon comment was in reference to a bizarre moment when he mocked Mr Dutton with such vigour that he allegedly made a female MP cry.

Michelle Landry, the Nationals MP for Capricornia in central Queensland, rose in Question Time on October 27 to accuse the prime minister of breaking a promise.

She said the Budget delated $800 million of Commonwealth funding to construct the Rockhampton Ring Road by at least two years.

Mr Albanese’s answer made reference to funding the Bruce Highway through the Yeppen Floodplain, south of Rockhampton.

Mr Dutton – also from Queensland – interjected about the town of Yeppoon, more than 50km away on the coast.

The PM seized upon this geographic error to mock the opposition leader for not knowing his home state well enough.

Ms Landry called the PM, and other Labor MPs who cheered him on as he shouted, hypocrites for bullying her while calling for parliamentary workplace culture to be reformed and made safer for women.

She said Mr Albanese called her after Question Time but claimed he only apologised for upsetting her, not for his behaviour. 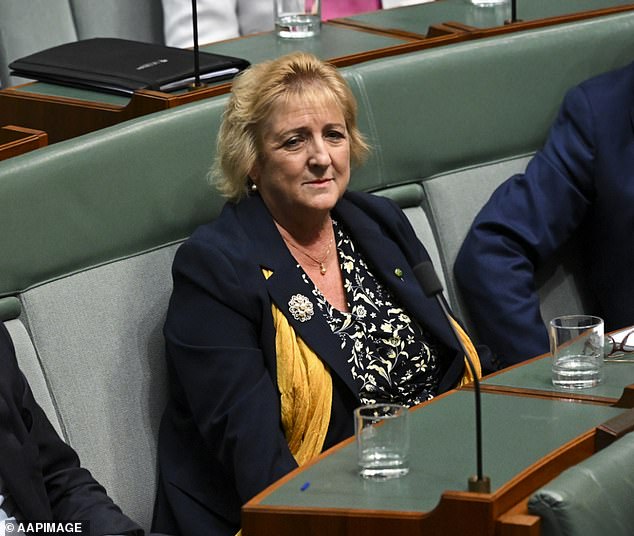 ‘Yeppoon is a different place! And you might want to ask the Member for Capricornia, because Yeppoon is on the coast, north of Rockhampton and Rockhampton is to the south,’ he excitedly exclaimed.

‘Yeppen Floodplain is to the south, it’s the southern entry of the Bruce Highway into Rockhampton!’

Mr Albanese got a rousing cheer from the Labor Party benches and twice shook his fist towards Mr Dutton shouting ‘Queenslander!’

‘Says it all!’ he added, dismissively.

The PM then explained the history of the road project and with a consistently raised voice blasted the opposition for not getting it down while in government.

‘We will get this project done, like we got the Yeppen Floodplain done, like we, by the way, got roads to Yeppoon done as well,’ he said.

The increasingly rowdy Labor benches responded to the PM’s boisterous display by cheering, clapping, and banging their tables. 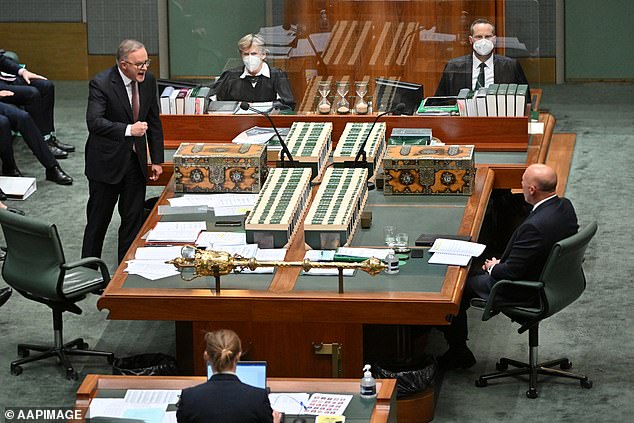 Mr Albanese at the same time made a dismissive swishing motion with his hands towards the Coalition benches as they rose in uproar.

The episode seemed like a good bit of parliamentary theatrics at Mr Dutton’s expense until the end of Question Time when deputy Liberal leader Sussan Ley raised a point of order.

‘The Member for Capricornia has left the chamber in tears and in a state of high distress,’ she said.

She asked Speaker Milton Dick to review the video and consider the appropriateness of his ‘tone’ during his very shouty answer. Mr Dick said he would do so and get back to her.

Mr Albanese appeared to be primarily addressing Mr Dutton during the period of his answer when his voice was raised, but Ms Landry insisted it was aimed at her.

Ms Landry was also seen on live TV smiling and laughing as Mr Albanese’s mocking of the opposition leader carried on.

‘We’ve been talking today about kindness in the Parliament, looking after each other and all the nice kind words,’ Ms Landry said.

‘But after he screamed and pointed and yelled at me, all his MPs – females included in that – were screaming, laughing and yelling as well. 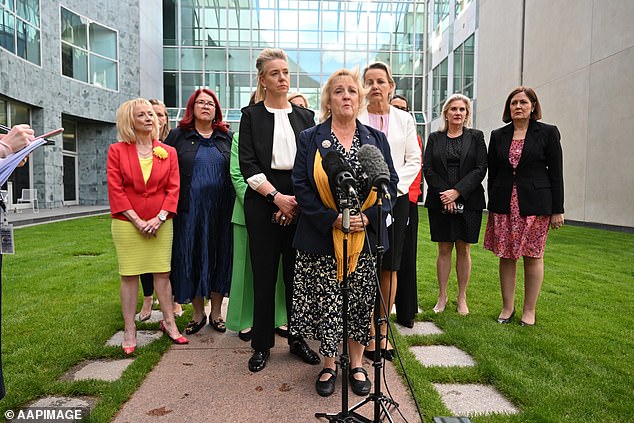 ‘This is not the first time that I’ve endured this stuff from the Labor Party, from the PM’s office who spread smear campaigns about me in Rockhampton.

‘I think this should be a place where we can all work together, I try to treat people with respect and how I wanted to be treated.

‘I want to thank my female colleagues for being here with me today because we’ve all had enough.

They’re a mob of hypocrites if they can say that everything is so wonderful on the left. Well, it’s not.

‘They treat us appallingly, our female MPs and senators are treated like absolute garbage all the time by the left and we have had enough.’ 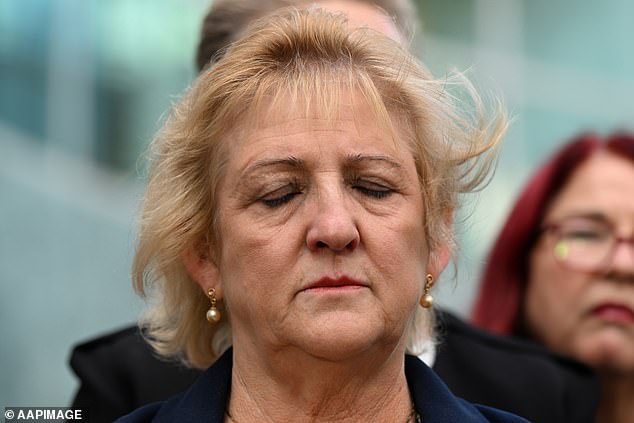 Michelle Landry said it was not the first time she;d been the victim of a Labor smear campaign Sussan Ley quoted a statement by Mr Albanese from months earlier, declaring parliament needed to do better to stamp out bullying

‘In reviewing the footage, I did not see the prime minister show any disrespect to the Member for Capricornia.

‘As the footage was not on the Member for Capricornia for the entire response, I did not see her leave the chamber.

‘Of the footage of the Member for Capricornia that I was able to review, she appeared engaged in the response from the prime minister.’