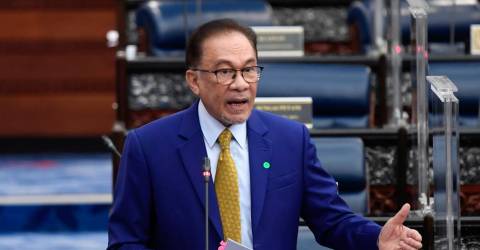 KUALA LUMPUR: Opposition Leader Datuk Seri Anwar Ibrahim (pix) is among the members of Parliament (MPs) who expressed support for the Bill to amend the Federal Constitution to be in line with the provisions in the Malaysia Agreement 1963.

When debating the Constitution (Amendment) Bill today, Anwar said matters related to MA63 were the main agenda in the Memorandum of Understanding (MoU) between Pakatan Harapan and the government.

He said the government’s approval for the amendments to the Federal Constitution to be made in line with the MA63 was a prerequisite for the MoU to proceed.

“We should pay tribute to the founders of Malaysia because I don’t want today’s generation to forget that the formation of Malaysia was made possible by the efforts undertaken by the leaders from Peninsular Malaysia, Sabah and Sarawak,” Anwar said.

The Bill, tabled for the second reading by Minister in the Prime Minister’s Department (Parliament and Law) Datuk Seri Dr Wan Junaidi Tuanku Jaafar earlier today, was aimed at strengthening the position of Sabah and Sarawak in the Federation of Malaysia.

In her debate speech, Rohani also expressed hope that all Malaysians would be able to respect the rights of Sabah and Sarawak in the context of MA63.

“I, together with the GPS leadership, will continue fighting for the rights of Sarawak as enshrined in the MA63 as it is the main foundation in the formation of Malaysia,” she added.