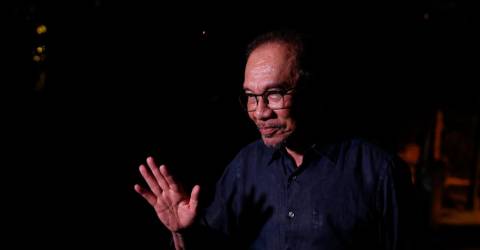 Anwar, 75, filed the letter of demand through Messrs SN Nair & Partners today, stating that he would take legal action against Hassan if he failed to receive any satisfactory feedback from him within three days.

According to the letter of demand, an audio recording containing Hassan’s allegations were uploaded on Twitter using the name Mohd Ropi Mat Sin.

He said the audio recording had been retweeted by a Twitter user with the name “Pemikir Malaysia” and was viewed over 431,500 times, elicited over 4,800 reactions and shared over 3,300 times as of the date of the letter was issued.

Nair said the slanderous words also implied that Anwar had abused his power as an MP, was a liar and unethical and had betrayed the people’s mandate.

He stressed that Anwar’s appointment as Malaysia’s 10th Prime Minister received the consent of Yang di-Pertuan Agong Al-Sultan Abdullah Ri’ayatuddin Al-Mustafa Billah Shah in accordance to the Federal Constitution following a special meeting of the Malay Rulers on Nov 24.

The letter stated that Hassan never denied the matter even after the audio recording went viral on Twitter and other social media channels.

“If YB Hassan denies saying those words and the audio recording, we have been instructed to by our client to seek a public and written confirmation that YB Hassan did not utter or publish such slander.

“Our client also seeks a retraction and an unconditional apology from YB Hassan to not repeat such slander,” the letter read.

Anwar is also planning to seek damages based on Hassan’s actions.-Bernama