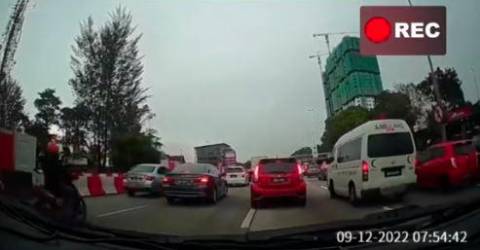 The footage depicted traffic as congested but still keeping pace until the yell of an ambulance siren beckoned vehicles to promptly move aside to make way.

It was revealed that an ambulance was being surrounded by multiple police escort vehicles, which was perplexing, but it became clear later on when the Prime Minister’s entourage followed suit.

The Tambun MP’s considerate act was praised by many netizens, some even drew comparisons with previous VVIP convoys on the road.

“If I can recall, there was a minister’s convoy back then who held an ambulance to go first. I just cannot put remember who it was,” a netizen said.

“This is how a Prime Minister should be. Prioritise the ambulances on the road. Don’t be like the previous ministers,” a netizen commented.

“Set a high moral standard for a PM. Let it be a yardstick for future generation,” another netizen said.