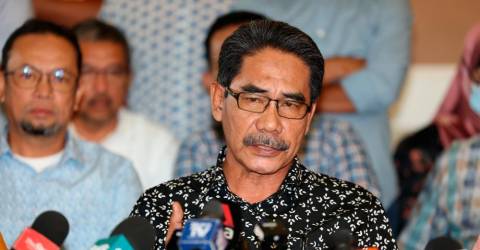 KUALA LUMPUR: A group of Umno division chiefs are of the view that internal discussions should be carried out before any decision on establishing a coalition between Barisan Nasional (BN) and other parties to form a government is made.

“We have also decided in the last Umno General Assembly (PAU) to reject Anwar Ibrahim and Pakatan Harapan (PH). No. Anwar, No. DAP.

“That was the decision, so if there is any coalition to be formed with PH, PN (Perikatan Nasional), it should be discussed among ourselves and the president should bring the matter to the Umno Supreme Council meeting first, the BN Meeting and discuss it with BN MPs,” he said at a media conference that took place at the World Trade Centre here, which was also attended by several Umno division chiefs.

He also said that if there was a need to form a pact with PH, a special Umno General Assembly should be held to address the matter.

According to Yahya, most Umno division chiefs were willing to be in the opposition than join any party to form the government.

Annuar said in the 15th General Election, Umno had fielded 80 per cent fresh faces but the people still rejected the candidates because they did not want Ahmad Zahid.

He said voters rejected the candidates as they see that Ahmad Zahid is dominating the party and this led to its defeat.

“We have to accept the reality of our defeat because the president controls the party, not the poster boy (Datuk Seri Ismail Sabri Yaakob), and Ahmad Zahid has to accept the fact that he is a liability to Umno.

“It’s a difficult thing to say, but for the sake of Umno’s survival, Ahmad Zahid has to step down because the people reject Umno as they see that Umno leaders do not have the willpower to reject a spoiled leader,“ he said.-Bernama