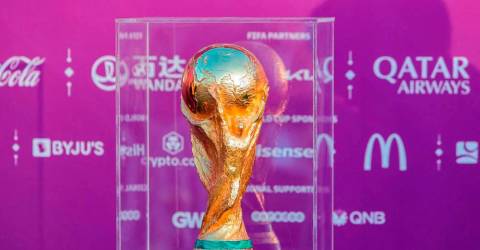 ISTANBUL: With only four days to go until the world’s biggest football event kicks off, Arab teams are gearing up to make the most out of this winter’s Qatar 2022 FIFA World Cup.

With the Qatari national team, Morocco, Saudi Arabia, Tunisia, Egypt, Algeria, the United Arab Emirates, Kuwait and Iraq from Arab countries have made at least one appearance in the World Cup so far, Anadolu Agency (AA) reported.

The teams of Saudi Arabia, Tunisia, and Qatar were able to qualify for the 22nd edition of the FIFA World Cup and Qatar is the first Arab nation to host a World Cup event.

Morocco, Tunisia, and Saudi Arabia are among the tournament’s most experienced, with five World Cup appearances, followed by Algeria with four, Egypt with three, and the United Arab Emirates, Kuwait, Iraq and Qatar with only one appearance.

Egypt was the first Arab side to qualify for the international tournament, making it for the first time at the Italy 1934 World Cup and the Pharaohs were absent until 1990.

Morocco was the first Arab African nation to qualify for the World Cup round of 16. They won the group stage ahead of England, Poland, and Portugal in 1986 Mexico.

The team was eliminated by West Germany in a narrow defeat.

Saudi Arabia was the first Arab Asian nation to advance to the knock-out after they came second in their group against the Netherlands, Belgium, and Morocco in the USA in 1994.

In addition to Morocco and Saudi Arabia, Algeria came off the group that included Belgium, Russia, and South Korea at the 2014 World Cup in Brazil. Germany beat Algeria 2-1.

Morocco and Saudi Arabia are Arab countries with the most games played at the World Cup, with 16 matches each. Tunisia are second, making 15 appearances.

Egypt and Kuwait are yet to taste a World Cup win, as Iraq and the United Arab Emirates did not manage to collect a single point so far.

The Qatar 2022 will be the first World Cup tournament in the northern hemisphere that will not be held during the summer season.

The 29-day football event will kick off on Nov 20 with an opener match between Qatar vs. Ecuador at 1600 GMT in the Al Bayt Stadium and conclude with the final match at the 80,000-capacity Lusail Iconic Stadium on Dec 18.-Bernama