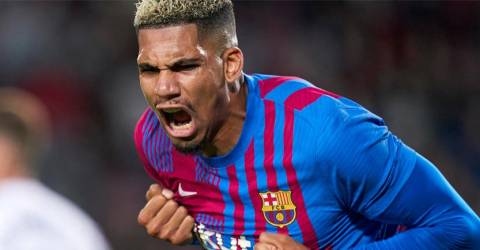 MANAUS: Uruguay and Barcelona centreback Ronald Araujo (pix) has suffered a hamstring injury that will rule him out of Thursday’s (Friday 8.30am in Malaysia) World Cup qualifier against Brazil, the country’s football association (AUF) said on Tuesday.

The 22-year-old defender was substituted in the second half of the 3-0 loss to Argentina and complained of soreness in his thigh, with a scan on Monday revealing an issue with his hamstring.

Uruguay occupy the fourth and final automatic qualification spot – one point ahead of Colombia – with seven rounds left to play.

Araujo will return to his club Barcelona where he will be assessed ahead of a crucial run of fixtures which include home league games against Valencia and Real Madrid as well as a Champions League group match against Dynamo Kyiv.

Araujo being sidelined would be a blow to Barcelona who have struggled this season under Ronald Koeman to sit ninth in La Liga and bottom of their Champions League group without a point.

The club were handed an injury boost, however, when forwards Ousmane Dembele and Sergio Aguero returned to training on Monday following long injury layoffs but they still need to be given the medical all-clear to be available for selection. – Reuters