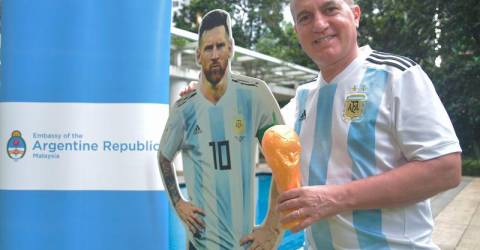 KUALA LUMPUR: Argentinian Ambassador to Malaysia, Manuel Balaguer Salas has praised Argentina’s players and said they were born to handle a high-pressure World Cup contest after Lionel Messi led them to a third World Cup title.

“Argentina needed to lose at least a game before the World Cup, but no one expected them to lose their first game of the competition. They were unbeaten for more than 30 over games before the Saudi Arabia game.

“But fortunately, that loss shook up the team, and the team recuperated,“ he told theSun when met during a World Cup winning celebration party held here today.

Salas hosted ambassadors from various countries during the ceremony, with them ringing praises on Argentina’s historic win and for putting up a great fight before securing their first World Cup title in 36 years.

On a night of high drama and fluctuating fortunes, Argentina squandered a 2-0 lead in regular time before going back in front in extra-time with Lionel Messi’s second goal. But then Kylian Mbappe completed his hat-trick to level 3-3 in the 118th minute with France’s second penalty that forced the shootout.

“You can’t imagine what this victory means to us,” Salas said, adding that his national team’s nail-biting victory over France on penalties in arguably the greatest final in the tournament’s history.

“Football is part of us, and nobody can take that way from us,“ he added.

He also heaped praises on Lionel Scaloni, who transformed a ‘broken’ Argentina into a formidable force.

“Scaloni took up a broken team, and he brought in players willing to put the team first. Alexis Mac Allister and Rodrigo De Paul are the greatest examples of what Scaloni has done for this team. The fans eventually trusted Scaloni, and the trust exceeded to a monumental level when Argentina won their 15th Copa America title after defeating Brazil 1-0 in the final,“ he added.

In 2018, amid much debate over his limited experience as a coach, Scaloni took charge of the national team. The side has been hit by a last-16 exit at the World Cup in Russia and the departure of his predecessor, Jorge Sampaoli.