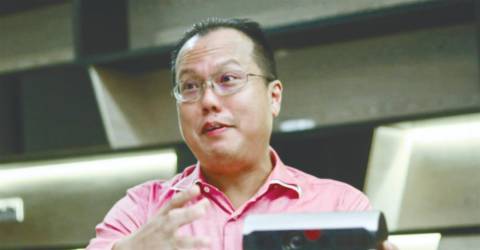 “We have completed a full financial year in the black, with all quarters being profitable. The last financial year in which we recorded profits was in 2014. This puts us in a good position to exit PN17. We expect to be officially out of the PN17 before our next financial year,” COO Chan Voon Jhin told SunBiz in an interview.

Chan is optimistic that Asia Media will be a strong established media player in three years’ time, with advertising assets in 2,000 elevators and 1,000 LED panels at governmental, residential and commercial buildings.

“The new management team that came in June last year has taken the company in a different direction. The focus now is on branding, and marketing, especially digital marketing. If you’re familiar with the Vertical Tower in Bangsar South, Equatorial Plaza, and Berjaya Times Square, you will see our lift projectors, LIFT-UP, there,” Chan said.

The group acquired these new digital advertising assets with the RM8.6 million proceeds from its private placement last November. Making its debut in Malaysia, the elevator projection advertising system is a collaboration between Asia Media and Mitsubishi Elevators Malaysia.

“With a total of 9,200 units of elevators all over Malaysia and Brunei under the care of Mitsubishi, we can gradually offer the service to all existing Mitsubishi clientele, helping them to generate new revenue, and uplift the image of the buildings.

“Our order book for this calendar year is RM15 million to date. Initiatives in the past year have borne fruit, with shareholders, investors and business partners increasingly confident of the company’s potential,” Chan said.

“On the 20% private placement, we now have 311 million shares, so we will be issuing another 62 million shares. On the rights issue pending Bursa approval, for every four shares, we will issue each shareholder three rights and one warrant. And we already have an agreement in place to acquire 51% of LookHere, just awaiting approval,” Chan explained.

The LookHere acquisition represents an investment for the group to enhance its competitiveness in the provision of digital out-of-home (OOH) media. Upon completion of the Lookhere acquisition, the enlarged group will be principally involved in a more comprehensive range of digital OOH media products and Lookhere will form part and parcel of the core business of Asia Media, which is expected to provide future growth earnings and cashflow and an opportunity to the group to restore its financial and operational viability.

For FY22, Asia Media returned to the black with a net profit of RM6.86 million from a net loss of RM1.72 million a year ago attributed to the shift of revenue from static advertisement to digital and online marketing and advertising.

Asia Media used to be the largest transit TV network in Malaysia back in 2008. It slipped into PN17 status in October 2019 after its shareholders’ equity fell to less than 25% of its issued capital. In August last year, its external auditor Messrs CAS Malaysia PLT highlighted a material uncertainty related to concern in its financial statements for the financial year ended March 31, 2021.

Asia Media’s previous CEO, Ricky Wong Shee Kai, had furnished a false statement relating to the company’s revenue of RM11.13 million to Bursa Malaysia, the Securities Commission Malaysia said in November 2021. He is still at large. The group filed a legal suit against Wong over account discrepancies earlier this year.

“Wong is no longer part of the company nor is he a shareholder. During the 2019 EGM, he was removed from the board and the company. As this is an ongoing court case, we cannot comment in detail,” Chan remarked.