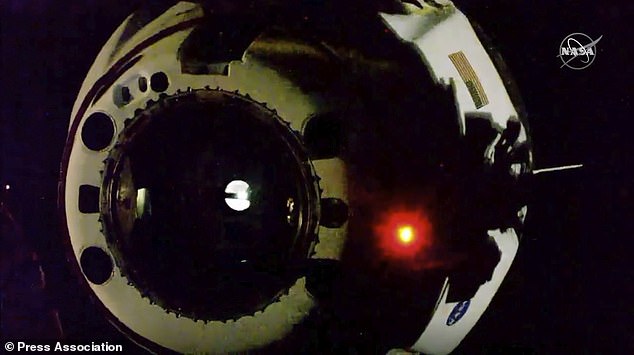 Two Nasa astronauts will make the first splashdown return in 45 years after SpaceX’s astronaut carrier the Crew Dragon successfully undocked from the ISS Robert Behnken and Douglas Hurley began their journey back to Earth amid the threat of Hurricane Isaias, which is edging closer to their landing destination Their departure from the ISS was announced by SpaceX in a tweet on Saturday The astronauts made history on May 30 when they became the first people to launch into low-Earth orbit on a commercial spacecraft that was built by SpaceXTheir mission, named Demo-2, also marked the first time Nasa launched astronauts from US soil in nine years

The SpaceX Crew Dragon spacecraft undocked from the International Space Station on Saturday with two US astronauts on board, beginning their journey back to Earth despite a storm threatening Florida.

NASA footage showed the capsule drifting slowly away from the ISS in the darkness of space, closing out two months aboard for the first US astronauts to reach the orbiting lab on an American spacecraft in nearly a decade.

‘And they are off!’ the US space agency tweeted, with Doug Hurley and Bob Behnken set to splash down Sunday.

The SpaceX Crew Dragon capsule, shown here separating from the International Space Station, has begun its return journey to Earth

NASA later added the capsule was confirmed to be ‘on a safe trajectory.’

Their proposed splash-down sites are off the coast of western Florida’s panhandle, while tropical storm Isaias is headed toward the state’s east coast.

NASA opted to go ahead with bringing the pair home despite the threat of Isaias, which was downgraded to a tropical storm from a hurricane on Saturday.

‘Now is the entry, descent and splashdown phase after we undock, hopefully a little bit later today,’ Hurley said in a farewell ceremony aboard the ISS that was broadcast on NASA TV.

On entering the Earth’s atmosphere, the Crew Dragon will face scorching temperatures of around 1,900C as it deploys parachutes to slow its speed down to around 119 miles per hour, before landing on the ocean.