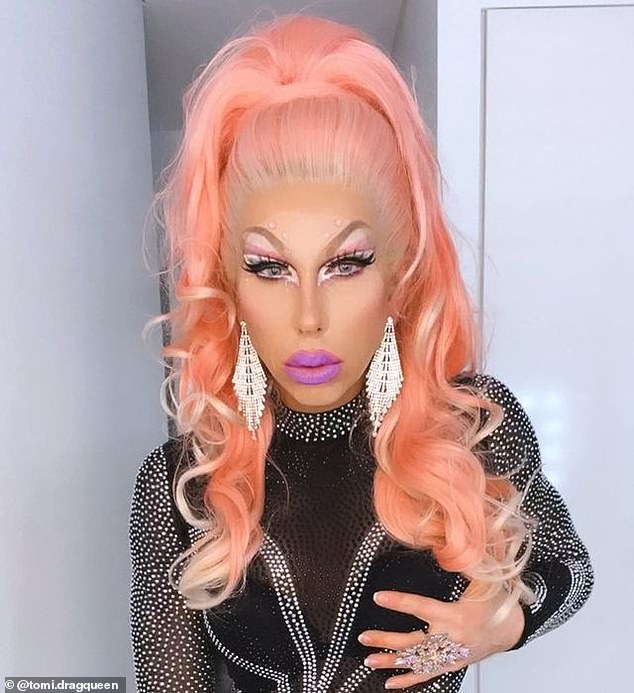 An Australian drag performer is copping a barrage of cruel comments as they share their recovery from facelift surgery at just 28-years-old.

Tomi Grainger, from Sydney, who goes by they/their pronouns, has been documenting their journey pre and post surgery on TikTok with many viewers questioning why they would get such an ‘unnecessary’ procedure so young.

But Tomi has hit back at the trolls saying the facelift was performed to remove loose skin that resulted from a bout of anorexia and extreme weight loss in their teens and early twenties. 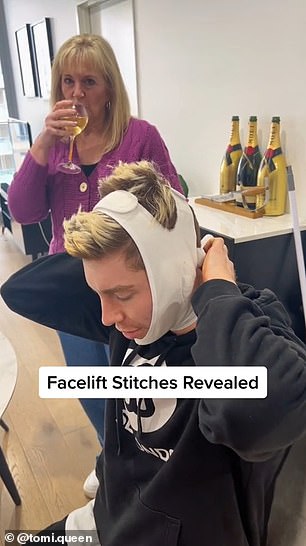 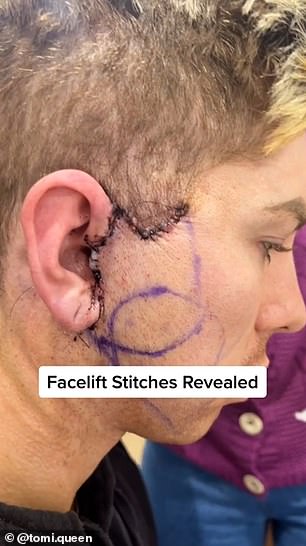 They told FEMAIL in the midst of their eating disorder they went from 70kg to just 40kg very quickly which resulted in a lot of long term damage to their body and skin on their face around their mouth.

Tomi started getting face fillers in their early twenties as a short term solution until their injector suggested they see a plastic surgeon.

‘It never really bothered me until I noticed heavy cracks begin to form around my mouth a few hours after wearing makeup,’ they told FEMAIL. 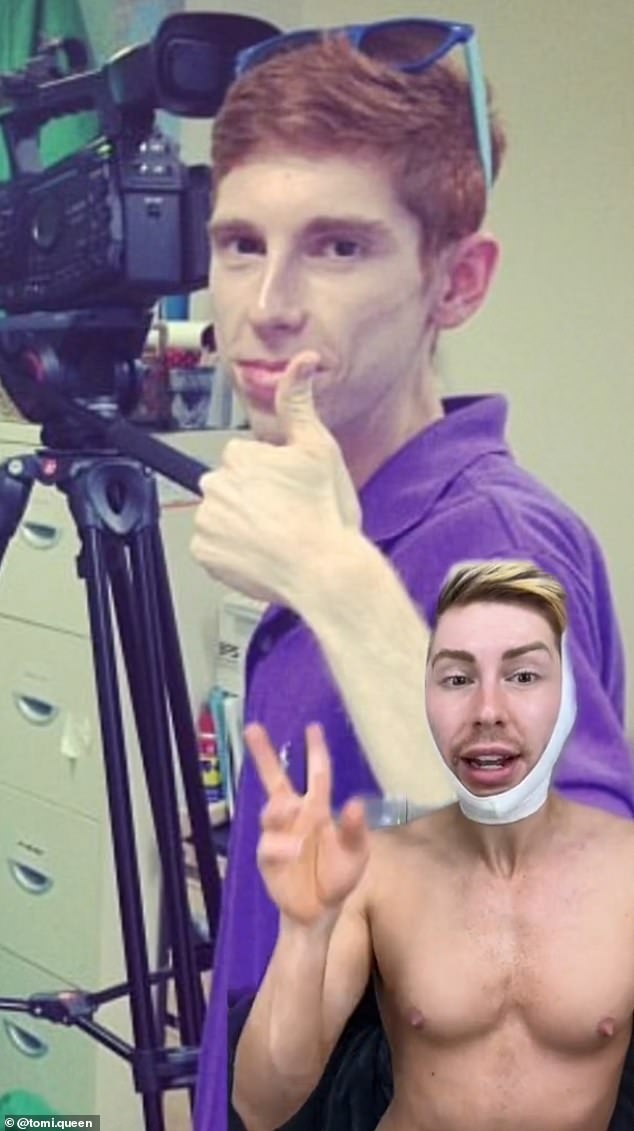 ‘I am a drag queen and so my appearance means a lot to me. You have your photo taken often, you see yourself back in videos, and I began to fixate on it.’

Tomi said they tried filler, ‘microcurrent’ gadgets that use small electric currents to tone facial muscles and ‘pretty much everything’ before they finally decided to take the leap and get a facelift.

‘Given that I had a history of anorexia, I’d reduced my skin collagen and made it far more elastic than for a regular 28-year-old male. Having the surgery was the only solution,’ the queer activist said.

‘Yes, there was a physical reason to getting this procedure and obviously a psychological component too. It wasn’t something I decided to do overnight. This was a few years of considering all of my other options. I have no regrets.’ 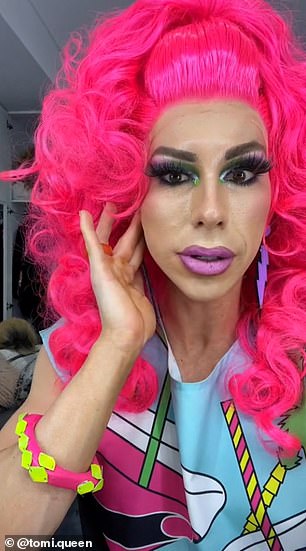 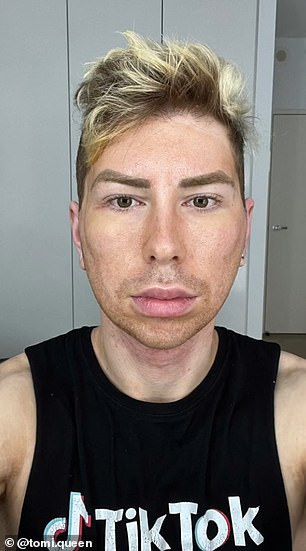 Before and after: Tomi ‘tried everything’ to undo the damage from their teens before getting the procedure which they are yet to see the full results of after the swelling does gown

They said they were awake for the entire procedure and admitted it wasn’t a ‘pleasant experience’.

‘You have a local anaesthetic and this numbs the area, but truthfully, you can feel pretty much everything,’ they recalled.

‘I could hear the snipping of my skin and the smell of my flesh as it was sealed from bleeding.’

A popular TikToker already, Tomi shared the details of their surgery and recovery with their fans resulting in a wave of nasty comments.

‘What’s wrong with these doctors?!!!! Unbelievable!!!,’ one person said.

‘Why? People are going too far these days,’ asked another. 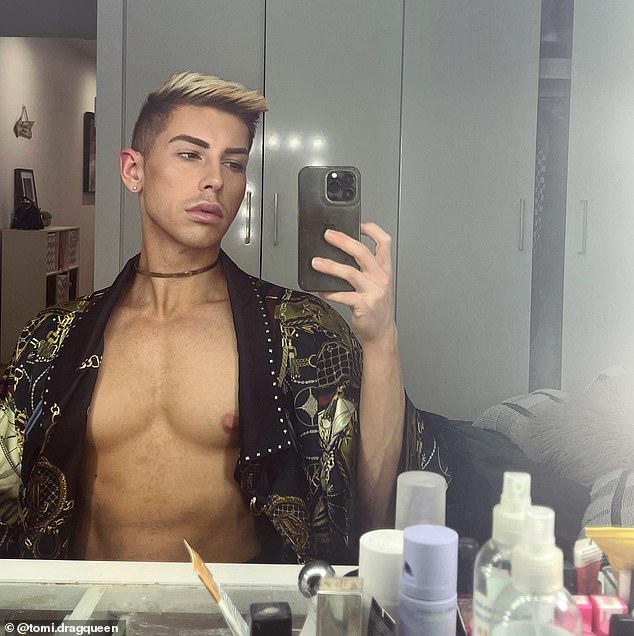 A popular TikToker already, Tomi shared the details of their surgery and recovery with their fans resulting in a wave of nasty comments

‘If anything this helped decide against it, so thank you,’ a third quipped.

However, Tomi remains unconcerned and firm the decision to get a facelift was right for them.

They are yet to see the surgery’s full results as their face is still somewhat sore, swollen and still recovering.

‘Even if I had the surgery without any medical history, it really shouldn’t matter. As an educated and informed adult under the guidance of an expert medical professional, we should feel empowered to make the decision that feels right for us,’ they said.

‘I am sure there are many more people out there that would have plastic surgery to improve their life if they weren’t fearful of what others would say in response.’ 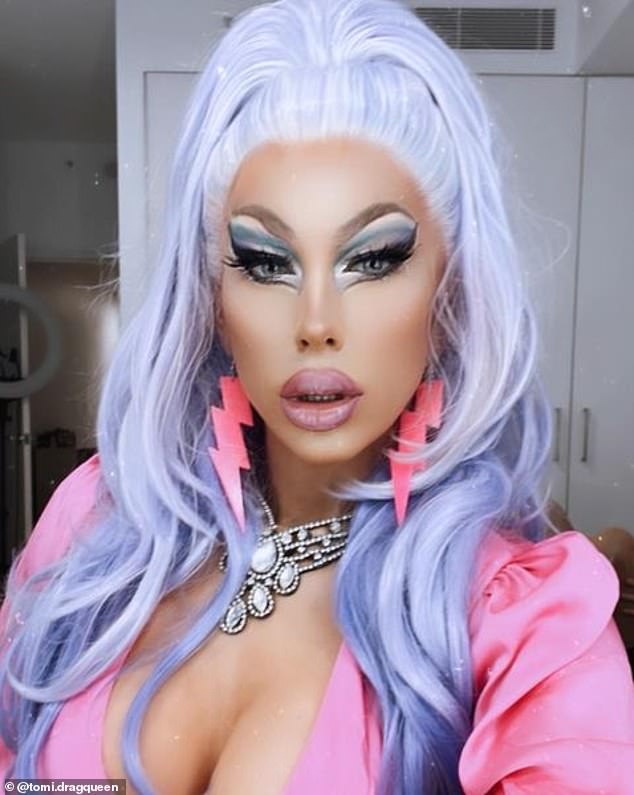 However, Tomi remains unconcerned and firm the decision to get a facelift was right for them

They said their family thought they were ‘crazy at first’ but have come around and are supportive of their decision.

Tomi said they are ‘proud’ they took the steps to be happier in their own skin and ‘rectify the damage’ they had caused when they were younger.

‘It’s so easy to look at someone with no empathy and judge them. In fact, we do this for our own self validation and to mask insecurities that are wedged deep into our own subconscious,’ they said.

‘We should respect and celebrate everyone’s journey to creating the person that they want to be.’