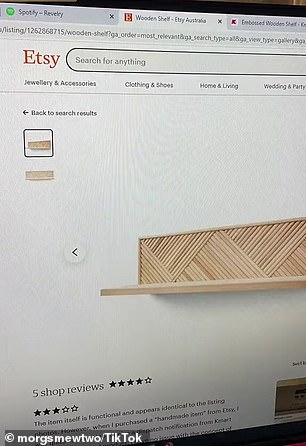 An online shopper has outed a seller on Etsy trying sling a $25 wooden shelf from Kmart for almost double the price.

In a video posted to TikTok, a Melbourne woman found a trendy wooden shelf listed for $40 on the online marketplace which is intended to be a marketplace for vintage, handmade and craft items.

However she later discovered the exact same shelf is being sold at Kmart for $15 less outraging viewers and prompting Etsy to remove the seller from the site. 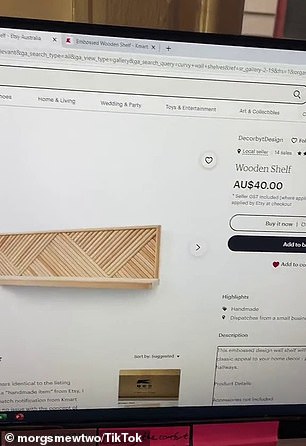 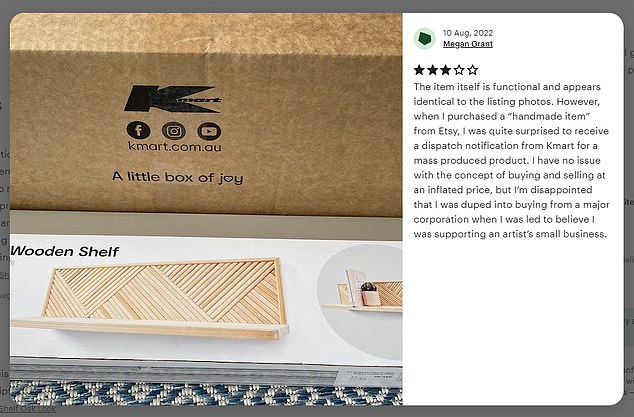 A review on the seller’s page confirmed the item was from Kmart saying: ‘When I purchased a ‘handmade item’ from Etsy, I was quite surprised to receive a dispatch notification from Kmart for a mass produced product’

‘Look at this shelf, looks cute, it’s $40, it’s from an Australian shop – it’s from f***ing Kmart. Stop! And more expensive,’ she said in the clip as she showed the Etsy listing and the Kmart website with the exact same embossed wooden shelf.

‘Not to be a millennial but this is why we can’t have nice things,’ she joked in the caption.

The video has been viewed more than 191,100 times and drew in hundreds of comments from frustrated shoppers as well as Etsy sellers.

‘It’s so frustrating that other people are ruining Etsy for us who truly are handmade,’ a business owner said.

‘But why? They’ll make 10 bucks by the time they package it,’ one user asked.

Another recommended reverse image searching items before buying so you know it’s from a reputable seller but not all were bothered by the ‘scam’.

‘People are trying is earn money so let them. Life is hard,’ one person said while another guessed: ‘I assume it’s for international buyers who may not be able to buy from AU Kmart online?’.

The seller who went by DecorbytDesign had a handful of reviews with some five-star while one confirmed the products they were selling were from Kmart. 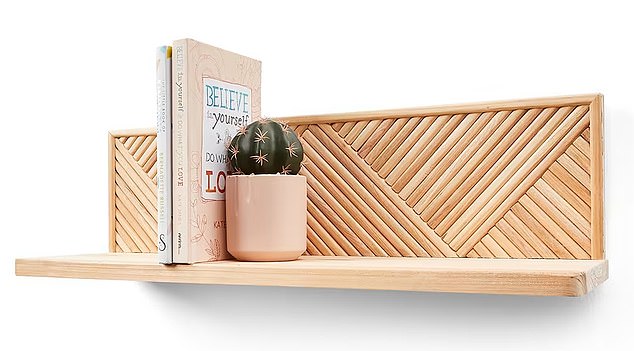 ‘When I purchased a ‘handmade item’ from Etsy, I was quite surprised to receive a dispatch notification from Kmart for a mass produced product,’ the three-star review read.

They admitted the shelf was functional and looked exactly like the picture and they had no issue with people buying and selling items at an inflated price.

‘But I’m disappointed that I was duped into buying from a major corporation when I was led to believe I was supporting an artist’s small business,’ they said.

According to its seller policy, reselling is only allowed on Etsy in the vintage and rafting supplies categories.

The online marketplace has a combinations of automatic controls, manual review and user flags to monitor if a seller is breaking the policy and identify violations.

Etsy has since removed the DecorbytDesign’s profile and they are unable to sell any more items as they did not qualify as handmade.