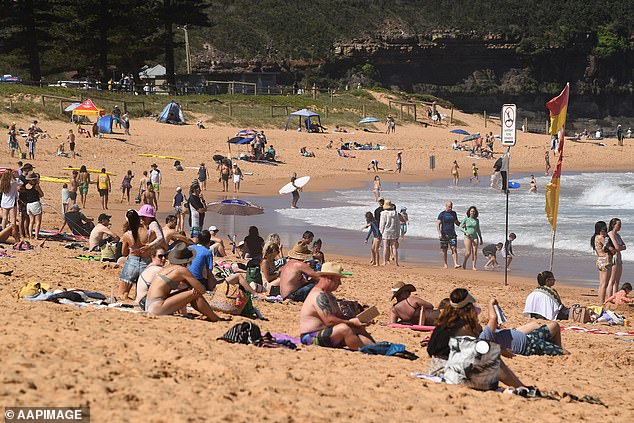 Australians flocked to the beach this weekend to soak up the sun after weeks of miserable weather.

Beaches across Australia’s east coast were packed as the temperature nudged 30C in Sydney and Brisbane with highs of 37C in Adelaide.

The weather is set to take a turn for the worse from Monday, with extreme heatwaves set to sweep across Melbourne, Adelaide and parts of Western Australia for at least three days, with severe fire dangers also expected for Tasmania and Victoria.

Forecasters at the Bureau of Meteorology predict temperatures will hit the high 30s across Victoria on Monday, rising as high as the low 40s in the state’s northwest.

Extreme heatwaves will be sweeping over Melbourne, Adelaide and parts of Western Australia for at least three days. Pictured: Mona Vale Beach in Sydney on Sunday 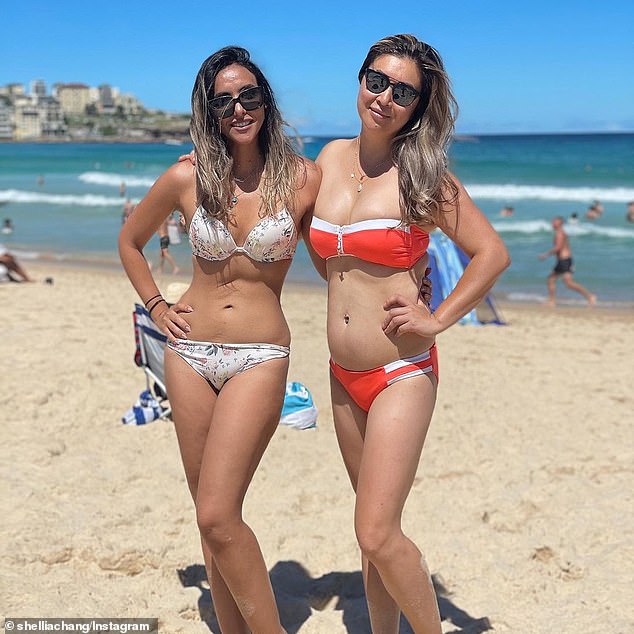 Fire danger warnings will be issued for the Mallee, Wimmera and Northern Country districts in Victoria on Monday.

‘The fire agencies will look at that information and make a decision on whether to declare a total fire ban for those areas,’ senior forecaster Domenic Panuccio said on Sunday.

Northerly winds and an outside risk of thunderstorms in Victoria will also push up the risk of fires.

‘It is a combination of a little bit of wind, very hot conditions, that wind change and relatively dry conditions as well,’ Mr Panuccio said.

‘There could be a couple of spots of shower activity, but only a fraction of a millimetre if anything with those storms.

‘There is a possibility of even seeing a little bit of dry lightning, which is not ideal at all for a fire danger day.’ 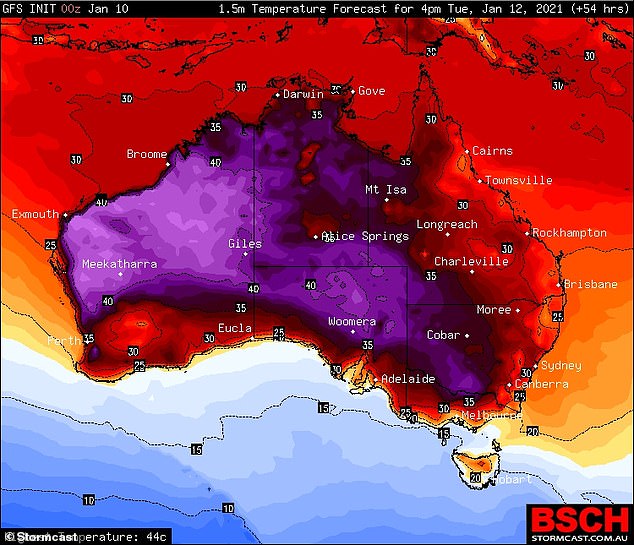 Victoria, Adelaide and parts of Western Australia are set to swelter through extreme heatwaves from Monday (pictured is national forecast for Tuesday)

Jonathan How, Bureau of Meteorology forecaster said that this scorching weather will reach its highest on Monday midday in Adelaide and will reach Melbourne only hours later, as told by news.com.au.

‘The temperature spike stems from the northern regions of WA where temperatures have climbed to 45C in the Pilbara,’ Mr How said.

Monday will be the warmest day for Victoria and this weather will not stop for the north and northwest of the state for the upcoming days. 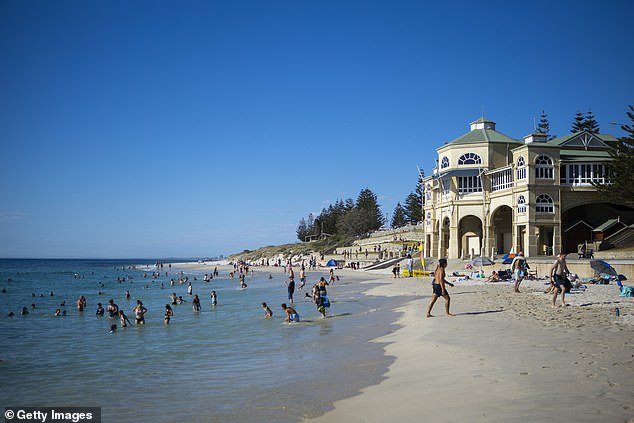 The temperature spike stems from the northern regions of WA where temperatures have climbed to 45C in the Pilbara. Pictured: Cottlesloe Beach, Perth

According to Mr How, there could potentially be a break from the scorching temperature in Melbourne and Adelaide, but the heat will continue in Pilbara in West Australia.

The northerly winds will push down hot air to Tasmania, lifting maximum temperatures 10 to 15C above the January average.

New Norfolk and Richmond in Tasmania are tipped to experience Monday’s most extreme maximums of 37C, two degrees hotter than Hobart’s forecast maximum.

The fire-friendly conditions are being made more complex by 30 to 40km/h winds and possible afternoon dry thunderstorms over southern Tasmania with little or no rainfall expected.

Meteorologist Luke Johnston expects the conditions to lift fire danger ratings in the South East and Upper Derwent Valley to severe, with the risk still very high for most other parts of Tasmania.

‘That would include the Western district, Central Plateau, the Midlands and the East Coast,’ Mr Johnston said.

There will be a brief reprieve from the sweltering heat for southern Victoria and Tasmania on Tuesday before the mercury climbs again on Wednesday.

However, for the southeast of Australia it ‘looks like a week-long pattern of cooler conditions’ after the heat goes.

‘It will be cooler than average for Victoria, Tasmania and SA into next week,’ Mr How said. 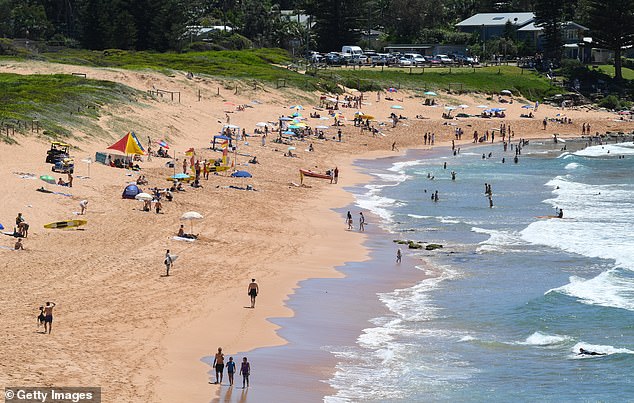 The southeast of Australia is set to return to a week-long pattern of cooler conditions. Pictured: Avalon Beach in Sydney on January 10

The hot weather comes as two major weather systems in the south-east, one over South Australia and one over NSW, brought heavy downpours over the Christmas Break to much of Australia.

The unique La Nina weather patterns have continued to cause havoc over Australia as just last week NSW experienced flash flooding and heavy rains in the New Year.

For now, Australians in NSW and Queensland only have this week to soak up the sun as cooler conditions are set to come back.

‘For eastern NSW, into Queensland, there will be showers and thunderstorms developing again later this week with cooler conditions remaining south of Queensland,’ said Mr How. 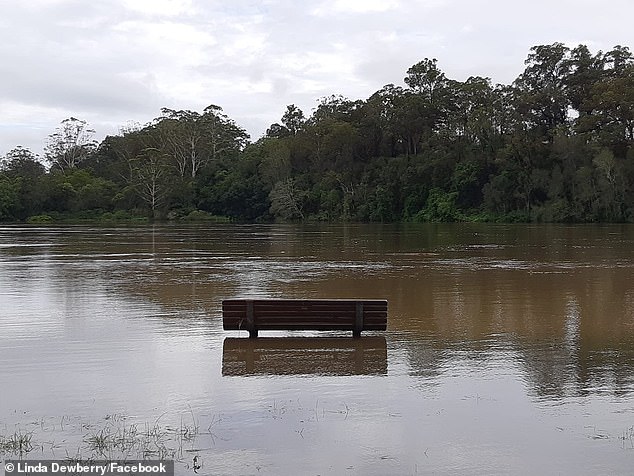 Last week NSW experienced flash flooding and heavy rains in the New Year as a result of the La Nina weather patterns. Pictured: Park in Wauchope, NSW in the first week of 2021

FIVE DAY WEATHER IN YOUR CITY