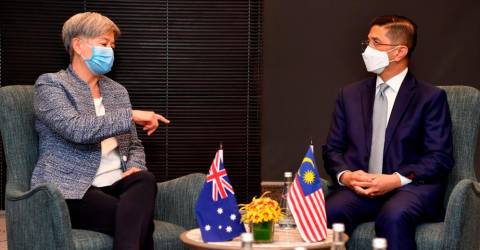 Mohamed Azmin said the matter was stated in their meeting here today where the investment to be made is in line with the National Investment Aspiration (NIA) policy which emphasises quality and high-tech investments.

He said the electrical and electronics, chemical industry, automotive, aerospace and digital economy were among the sectors under the NIA that Malaysia would pay attention on to attract Australian investors.

“I think this is a new approach not only for inward investment but they are ready to make the transfer of new technologies and also create a business ecosystem and build a global supply chain among local SMEs (small and medium enterprises).

“This (Australian investment) will reduce our reliance on foreign labour and give domestic SMEs the opportunity to be part of the global supply chain and this is a commitment that has been given,” Mohamed Azmin told the media after receiving Wong’s courtesy call today.

Mohamed Azmin said both countries also agreed that the Malaysia-Australia Free Trade Agreement (MAFTA) be revised so that it is more relevant to current demands.

Mohamed Azmin said Malaysia and Australia agreed that the negotiation process to upgrade the Asean-Australia-New Zealand Free Trade Area (AANZFTA) could be finalised by the end of this year so that economic cooperation could be strengthened in new strategic areas.

“AANZFTA has been agreed to be a priority for member countries to enhance cooperation on this free trade platform,” he said.

AANZFTA, which involves 10 Asean member countries, Australia and New Zealand, came into effect in January 2010. It abolished tariffs for 90 per cent of goods traded between the bloc and the two countries.

According to the ASEANbriefing.com website, the agreement will be fully implemented by 2025, with almost all trade between Asean countries, Australia and New Zealand being tariff-free.

Mohamed Azmin said the free trade agreement was important because Malaysia as a small economy and a small trading nation needed partners to develop a wider potential or market.

According to him, so far Malaysia has signed and ratified 15 free trade agreements, namely seven bilaterally and eight regionally.

“The domestic market is small and, of course, with Malaysia’s participation in many of these free trade agreements, it can open up a wider area.

“One of these independent agreements is AANZFTA, which will definitely provide an opportunity for local players to penetrate markets among Asean countries, Australia and New Zealand (where) we can enjoy import duties waiver or even a wider market,” he said. — Bernama