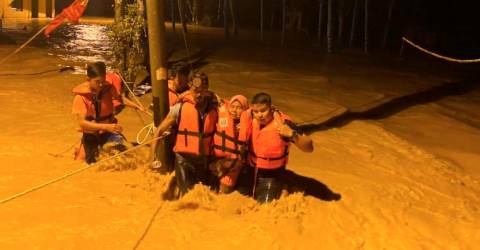 Village headman, Nor Mohamad Che Hussain said the last time the village was flooded was on Sept 8 and today, it was hit by floodwaters again.

“It started raining heavily at about 4.30pm and at about 7pm water began to enter our homes and the affected residents had to be moved to the temporary relocation centre (PPS).

“Prior to this, the PPS was at the Kampung Padang Empang hall. But the flood victims had to be moved to another PPS because there were incidents where wild animals would damage the tents housing the flood victims,” he said when contacted by Bernama.

According to him, the new PPS location was much safer because the area is surrounded by a wall.

“The PPS was activated at 8.30pm and efforts to transfer the affected residents are still ongoing…the number of victims is expected to increase and tallying is still ongoing,“ he said.

He also said that heavy rain in the Baling district had resulted in Sungai Kupang bursting its banks at Kampung Padang Empang and Kampung Iboi.

“It was raining heavily at 10pm yesterday and flood water has not subsided while the river is on alert level,“ he said.

On Sept 8, some 130 victims from 37 families in Baling and Kupang were affected by a flash flood that hit the area for the third time in two months.

In the first incident on July 4, three lives were lost, including a senior citizen and a mother who was four months pregnant.

The second flash flood struck on July 28 but there were no casualties. – Bernama