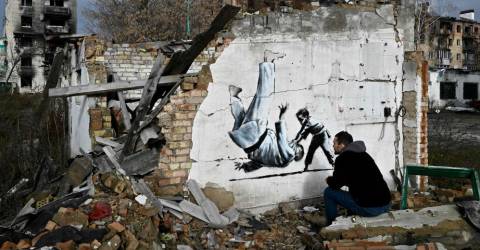 KYIV: The infamous street artist Banksy has unveiled a new work stenciled on the side of a shelling-damaged building in Ukraine.

According to United Press International (UPI), the work, posted to Banksy’s Instagram account, features a side view of a human figure performing a handstand on a pile of rubble with their hair tied back into a bun in his signature stencil black-and-white stencil style.

Banksy did not provide much of a caption for the new artwork, but labeled its location as being in the city of Borodyanka — located about 35 miles northwest of Kyiv. It was among one of the first towns hit by Russian airstrikes after President Vladimir Putin ordered the invasion in February.

The posting seemed to confirm reports that the artist — whose paintings have sold for tens of millions of dollars — was in Ukraine after other murals seemingly made in his style were spotted popping up across the war-torn country.

UPI also reported that in another artwork, which has not yet been claimed by Banksy, a young boy can be seen flipping a man that appears to be Putin in a judo match.

Banksy, who has remained anonymous despite making work for nearly two decades, is known for making work with sociopolitical messaging.-Bernama