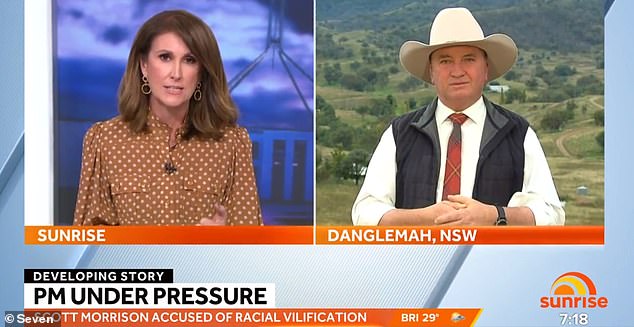 Barnaby Joyce has had text messages he sent about Scott Morrison being a ‘hypocrite and a liar’ thrown in his face during a heated TV stoush.

The Deputy Prime Minister on Monday faced off with Sunrise’s Natalie Barr over claims Mr Morrison made comments a decade-and-a-half ago urging Liberal pre-selectors not to vote for the ‘Lebanese guy because his family background will put off voters’.

Mr Morrison has emphatically denied the allegations – made in two signed statutory declarations.

Mr Joyce said the timing of the claims, just before a federal election, showed they were part of a political ‘hit job’.

But Barr pointed out leaked texts sent earlier this year showed Mr Joyce has disparaged the PM as ‘hypocrite and a liar’ who ‘earnestly rearranges the truth to be a lie’.

Mr Joyce today defended his comments, saying his texts were meant to be private.

The messages in question were sent by a third party to former Liberal staffer Brittany Higgins after the PM claimed he did not know about the rape allegations in Parliament House.

Mr Joyce said in the messages: ‘Tell BH (Brittany Higgins, that Morrison) is a hypocrite and a liar from my observations and that is over a long time.

‘I have never trusted him and I dislike how he earnestly rearranges the truth to a lie.’

Mr Joyce (right) has rallied around Prime Minister, Scott Morrison amid racism allegations ahead of the federal election. However, Ms Barr was quick to point out that Mr Joyce had called the PM a ‘hypocrite and a liar’

Ms Barr went on to ask the Deputy Prime Minister what he thought of the accusations of racism against the PM.

‘If you’re going to call someone a racist and they’re not you’re actually using racism as your weapon, ‘ Mr Joyce said.

‘If this is the honest view, then they could have litigated this years ago, but it wasn’t. It’s come out now because they’re orchestrating a political hit.’

Mr Joyce has been at pains to insist he backs Mr Morrison in the wake of his text messages leaking earlier this year.

He said that comments against the Prime Minister are detracting from real political debate.