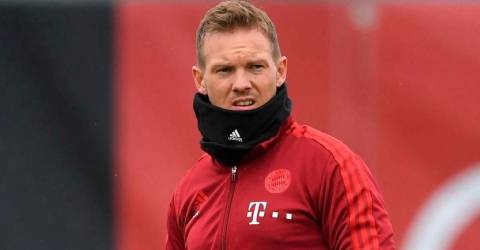 MUNICH: Bayern Munich will deliver against Villarreal in their Champions League quarterfinal second leg on Tuesday (Wednesday 3am in Malaysia) despite a bad first-leg performance because too much is at stake, Bayern coach Julian Nagelsmann (pix) said on Monday.

The Bavarians suffered their first defeat in the competition this season, losing 1-0 in Spain last week with Villarreal the dominant side after also hitting the woodwork and missing several chances to score more goals.

“We played a bad game and they played their best game,” Nagelsmann told a virtual news conference. “This will not happen again, to play badly against the same opponent twice.”

The Bavarians were also far from their best in their 1-0 win over Augsburg in the Bundesliga on Saturday, failing to win a corner in the entire first half.

Nagelsmann said that while there may have been a slight dip in form it was only temporary.

“We delivered in the past and it should be like that tomorrow. We have to, we must, we want. It is normal when you win so many titles and have such success for so many years that you maybe need this pressure sometimes to get the maximum out.”

Bayern are chasing their 10th consecutive Bundesliga title and last won the Champions League in 2020.

“Maybe it will be a sparkling game from our side tomorrow,” Nagelsmann said.

Six-time European champions Bayern were the favourites going into the tie with Villarreal, who reached the Champions League semifinals in 2006.

The Spaniards outclassed Bayern in the first leg with Nagelsmann saying his players needed to become more aggressive on Tuesday.

“We must turn up our complete intensity level. We did not take the last steps, the last metres in the first leg. We have to play more uncomfortable football,” he said.

“We made many mistakes. They made one to keep us alive. They could have scored more goals but we are still alive and we should show it on the pitch tomorrow.” – Reuters