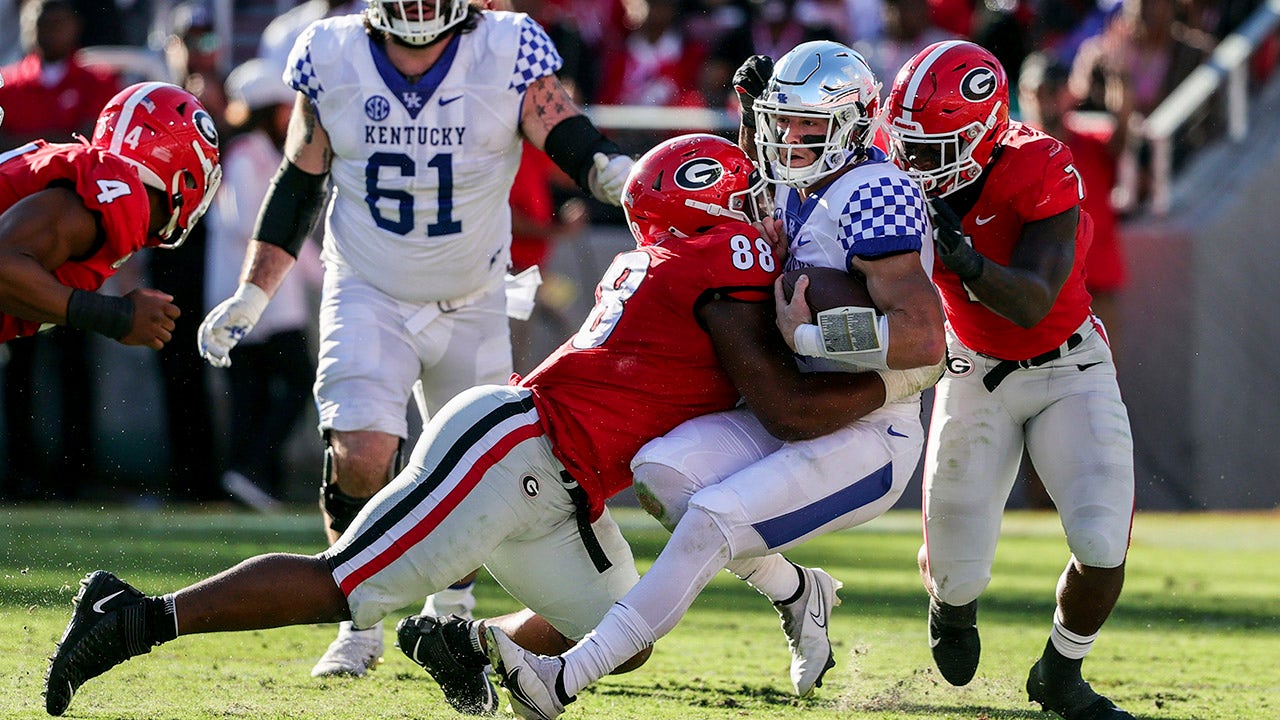 The final seconds were meaningless.

Except to the Georgia defense.

For the first time all season, the fearsome Bulldogs gave up two touchdowns in a game Saturday. It didn’t really matter as they romped to another victory — their first as the nation’s new No. 1 team — with a 30-13 triumph over No. 11 Kentucky.

Still, their desire to keep Kentucky from scoring at the end, and the lengths the Wildcats went to for their second TD, epitomized where Georgia’s at right now.

They want to bury opponents.

“There may only be 4 seconds left in the fourth quarter, but we still don’t want anybody in our end zone,” linebacker Adam Anderson said. “I’m still hurting right now.”

Will Levis was stuffed on a quarterback sneak. JuTahn McClain was stopped for no gain. Instead of letting the clock run out, the Wildcats called their final timeout.

Finally, they scored. Levis delivered a quick slant to Wan’Dale Robinson, who dove into the end zone with 4 seconds remaining, while what was left of the crowd at Sanford Stadium booed loudly.

Georgia’s defense had given up only two touchdowns all season. Kentucky managed to double that total, though the Bulldogs weren’t done yet.

Clearly angry, they blocked the extra point to keep one last point off the board.

“It’s just pride,” said coach Kirby Smart, whose team is surrendering a miniscule 6.6 points a game. “When you’re competing at the highest levels to be the best in the country, that doesn’t change — regardless of the scoreboard or the time on the clock.”

The Bulldogs limited Kentucky to 243 total yards, while also blocking a field-goal attempt on the final play of the third quarter.

“They’re a great defense,” Levis said. “I think we were able to do some things that we’re going to be proud of looking at the tape, but could’ve had opportunities to do a little more.”

Sitting at 6-0 for the first time since 1950, the Wildcats pulled out all stops, even running a hook and lateral. But they followed up 330 yards rushing in a win over LSU with a mere 51 yards on the ground against Georgia.

Leading only 14-7 at halftime, the Bulldogs took the second-half kickoff and drove 75 yards in six plays to effectively finish off the Wildcats and gain a stranglehold on the SEC East race.

An apparent 59-yard touchdown pass to Bowers was negated by a holding penalty, but Bennett connected again with the freshman in the right corner of the end zone for a 27-yard score that did stand.

Bowers had another TD on a 20-yard play with about 11 1/2 minutes remaining to make it 30-7. He finished with five receptions for 101 yards.

After a scoreless opening quarter, Georgia scored on back-to-back possessions. James Cook took a short pass 19 yards to the end zone, and Zamir White followed with a 24-yard scoring burst right up the middle.

Late in the first half, Kentucky finally got something going.

Catching a break when a video review overturned a fumble call, the Wildcats covered 75 yards in 13 plays, converting three times on third down. Levis capped it off with a 1-yard touchdown pass to Justin Rigg.

Kentucky: The Wildcats are building a top-tier program and could take some solace from scoring their first touchdowns against Georgia since 2018. But they still have a ways to go to compete against the Bulldogs, who have won 12 straight in the one-sided series.

Georgia: With plenty of confidence in Bennett, the Bulldogs were able to give Daniels two more weeks of rest before their next game. That should ensure he is fully recovered from a lat muscle injury.

Georgia was No. 1 this week for the first time since the 2008 preseason poll. That year, the Bulldogs won their opening game but a lackluster performance caused them to slip to No. 2.

No chance of that happening this time. Georgia was a unanimous choice for the top spot and will likely keep all those votes in the new Associated Press poll Sunday.

The NCAA mark stretched back to 2014 and involved six kickers: Marshall Morgan, Patrick Beless, William Ham, David Marvin, Rodrigo Blankenship and Podlesny, who had been perfect on 71 PATs before his miss.

Kentucky: After an off week, the Wildcats head to Starkville on Oct. 30 to take on Mississippi State.

Georgia: The Bulldogs are also off next weekend, then travel to Jacksonville to face Florida in the annual “Cocktail Party” rivalry game on Oct. 30.