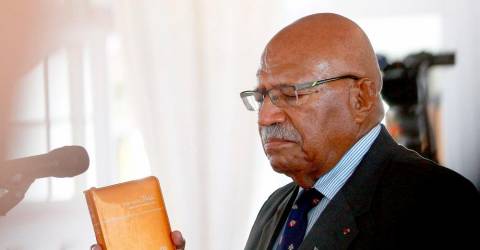 WASHINGTON: US President Joe Biden on Saturday congratulated Fiji’s Prime Minister Sitiveni Rabuka on his return to power, describing the two countries as “close partners” working for peace and prosperity in the Indo-Pacific.

“As close partners, Fiji and the United States work together to advance an Indo-Pacific that is free, open, prosperous, and secure,“ Biden said in a statement a day after Rabuka was confirmed as the island nation’s new prime minister.

Rabuka, a 74-year-old former military commander, replaces Frank Bainimarama, who toppled the government in a 2006 coup and became prime minister a year later.

Fiji, one of the most populous and prosperous Pacific island nations, grew closer to China under Bainimarama.

Rabuka has signalled a willingness to shift away from Beijing in favor of traditional allies Australia and New Zealand.

He said in the years ahead he will seek to further “strengthen the bonds between our people and advance our shared vision for a peaceful and prosperous Indo-Pacific.” – AFP