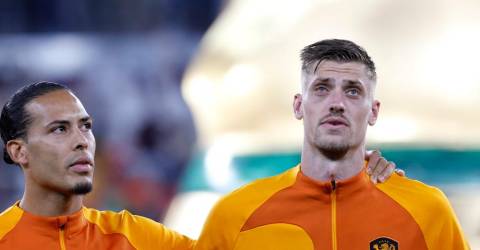 DOHA: The biggest player at the World Cup has also emerged as one of the biggest surprises after the 2.03 metre (6.66 feet) tall Andries Noppert made an unexpected international debut for the Netherlands on Monday.

Veteran Dutch coach Louis van Gaal has penchant for springing a shock or two but picking the 28-year-old to keep goal in Monday’s World Cup win over Senegal was one of his more outrageous moves.

However, the giant Heerenveen goalkeeper, with a total of only 32 appearances in the Dutch topflight, did not put a foot wrong as he made a handful of impressive saves and kept a clean sheet in the 2-0 victory at the Al Thumama Stadium.

It capped a remarkable rise for a player quick to admit: “This is also bizarre to me, even a few weeks ago, I wouldn’t have expected it.

“It’s special. You dream this, I never thought it was possible. As a little boy everyone dreams of it, later you don’t assume it. If anyone can do this, it’s me,“ he told Dutch NOS television.

Van Gaal was pleased too. “Not a bad choice,“ he crowed in the Dutch television studio. “I picked him because he is the player in form.”

Only two years ago, Noppert’s parents were advising him to quit the game and his girlfriend suggested signing up with the police after a meniscus injury saw FC Dordrecht fail to extend his contract and left him without a club for six months.

But in the space of two years things have changed dramatically.

It would already have been a dream year for Noppert after being signed before the season by his boyhood club Heerenveen, of whom he is a staunch supporter.

He had started out as a junior at the club, picked up from home for training by a bus where another passenger was Hakim Ziyech, featuring at the World Cup for Morocco.

Noppert did not make it initially, moving to the Dutch second division and then Serie B club Foggia, where he played only eight games.

At Go Ahead Eagles last season he got a new chance and has not looked back, his rapid rise culiminating in his first cap on Monday.

“Louis van Gaal told me that I had to play like I do at my club, but in a different guise. I just have to stop balls. Does it make sense that I started the game? When is it the right time then?” he said.

“In the Netherlands we all complain that we don’t have good keepers, but then you have to give boys a chance. I don’t care if it makes sense, I’m doing my best and that’s all I can do.” – Reuters