Remainers have taken to the streets outside Downing Street this evening to protest against Boris Johnson‘s emphatic election win – waving flags and placards around and shouting ‘not my Prime Minister’.

Dozens descended on Whitehall, central London just hours after Mr Johnson pledged to heal the divisions of Brexit, as he returned to Downing Street after securing a crushing General Election victory over Labour.

But despite Mr Johnson’s promises, groups including Stand Up To Racism continued to shout and protest chanting slogans including ‘to hell with Boris Johnson’ and ‘Boris, no, no, no’.

Earlier today, Mr Johnson sought to reach out to Remainers, insisting his ‘One Nation’ government would never ignore their feelings of ‘warmth and sympathy’ towards the other nations of Europe.

Police are in attendance at the anti-Boris Johnson protest outside Downing Street this evening. Protesters were seen holding placards including ‘defy Tory rule’ and ‘no to racism’ 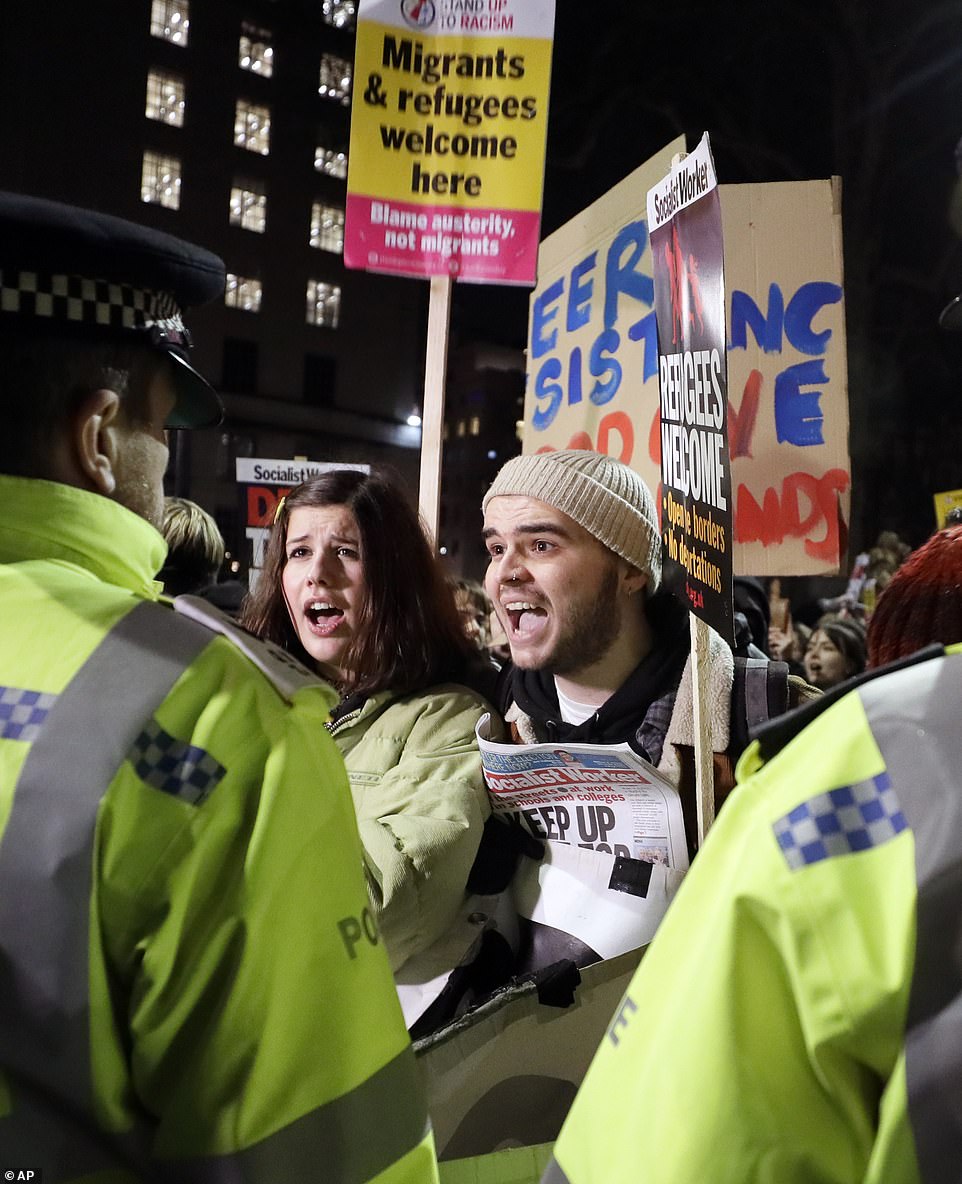 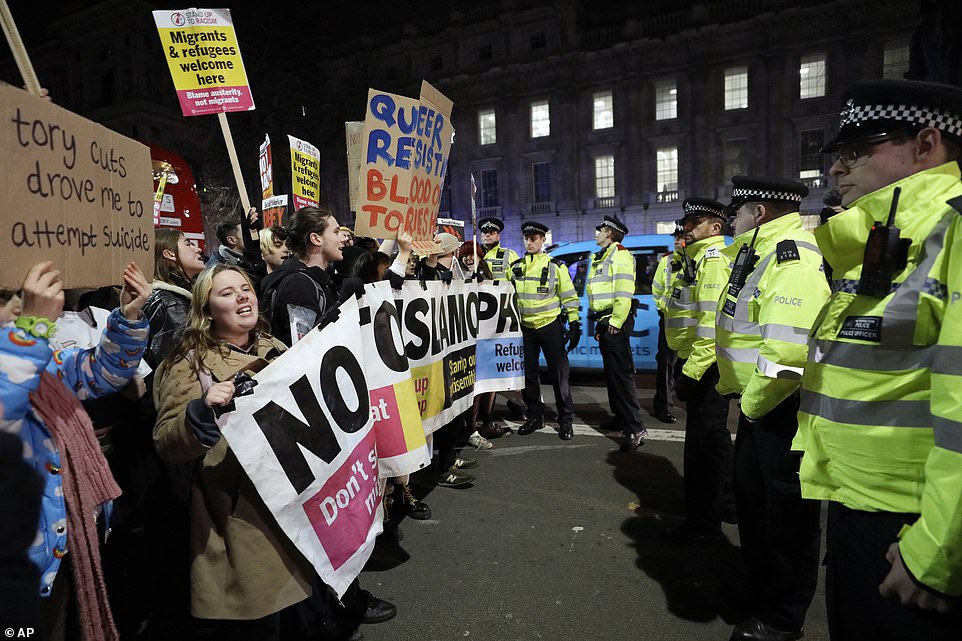 A group of protesters hold a banner as they protest against the general election victory. Placards on show included one which said: ‘Tory cuts drove me to attempt suicide’ 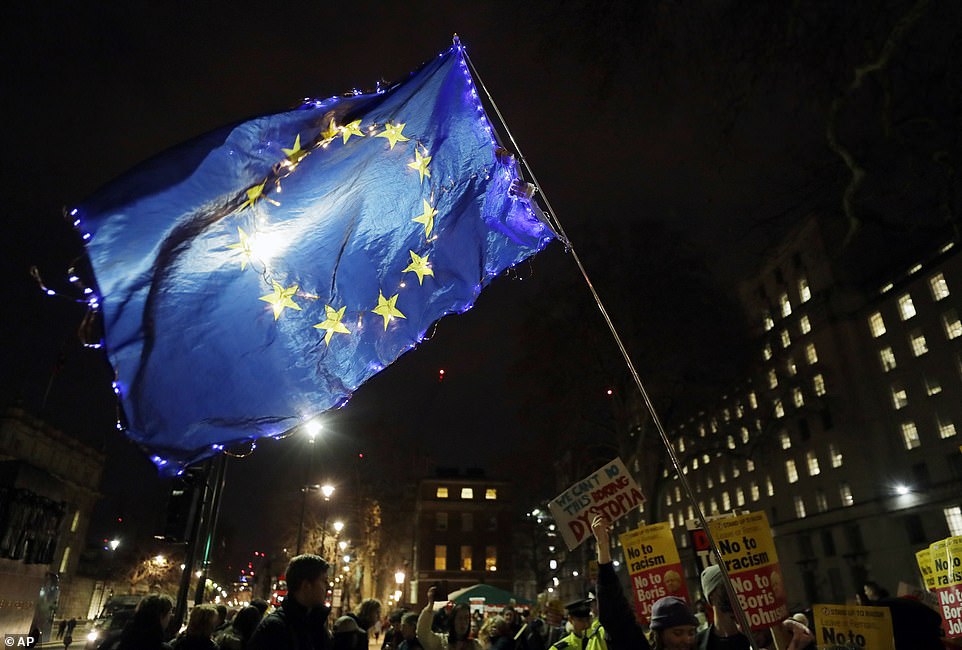 The protesters wave European Union flags around during the protest. Earlier today, Mr Johnson sought to reach out to Remainers, insisting his ‘One Nation’ government would never ignore their feelings of ‘warmth and sympathy’ towards the other nations of Europe 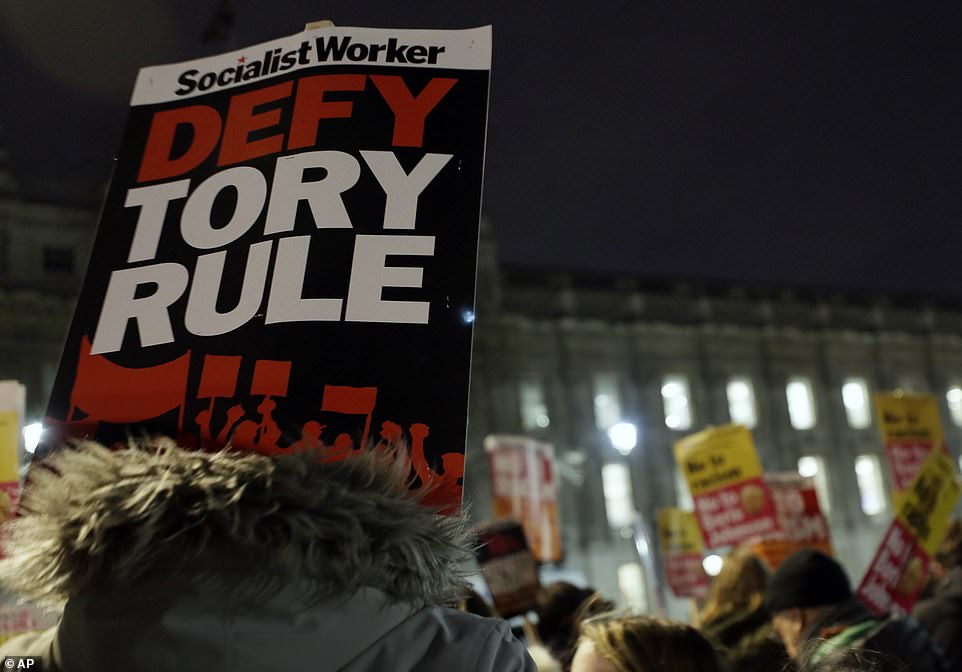 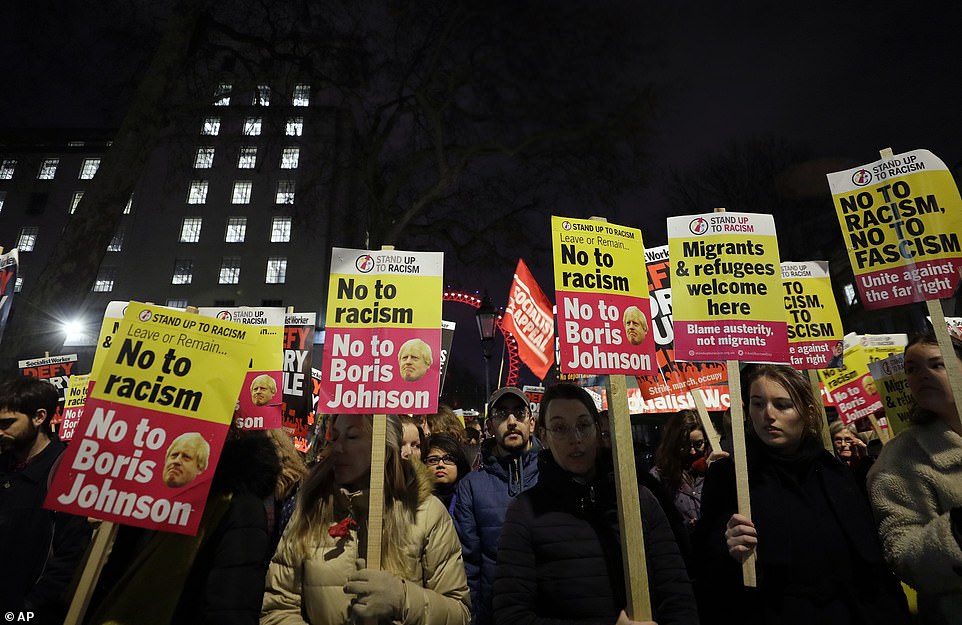 Many of the protesters appeared glum as they shouted slogans including ‘to hell with Boris Johnson’ and ‘Boris, no, no, no’

‘Now is the moment, precisely as we leave the EU, to let those natural feelings find renewed expression in building a new partnership,’ he said.

‘I frankly urge everyone on either side of what are, after three and a half years, increasingly arid argument, I urge everyone to find closure and to let the healing begin.’

But protesters, surrounded by police shouted towards Downing Street as they struggle to get to terms with the election results.

With all 650 seats declared, the Conservatives had a majority of 80 – the party’s strongest election performance since Margaret Thatcher in the 1980s.

The Prime Minister is now expected to reintroduce his Brexit deal in the Commons next week following the Queen’s Speech and State Opening of Parliament on Thursday.

The result plunged Labour into turmoil, with Jeremy Corbyn announcing he would not take the party into the next general election after seeing a string of former strongholds fall to the Tories.

But he faced furious demands to quit immediately after he said he intended to lead the party through a ‘process of reflection’ as it considered the way forward.

Meanwhile Mr Johnson was faced with the prospect of an almost immediate constitutional showdown as Nicola Sturgeon demanded the right to hold a fresh referendum on Scottish independence. 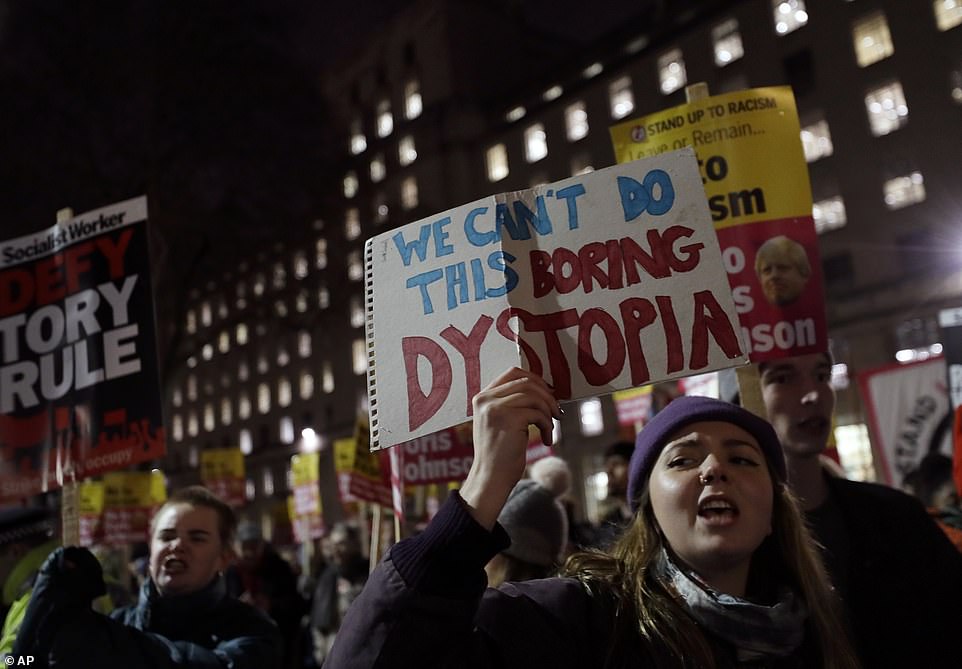 With all 650 seats declared, the Conservatives had a majority of 80 – the party’s strongest election performance since Margaret Thatcher in the 1980s. But bitter Remainers took to the streets outside Downing Street tonight to protest 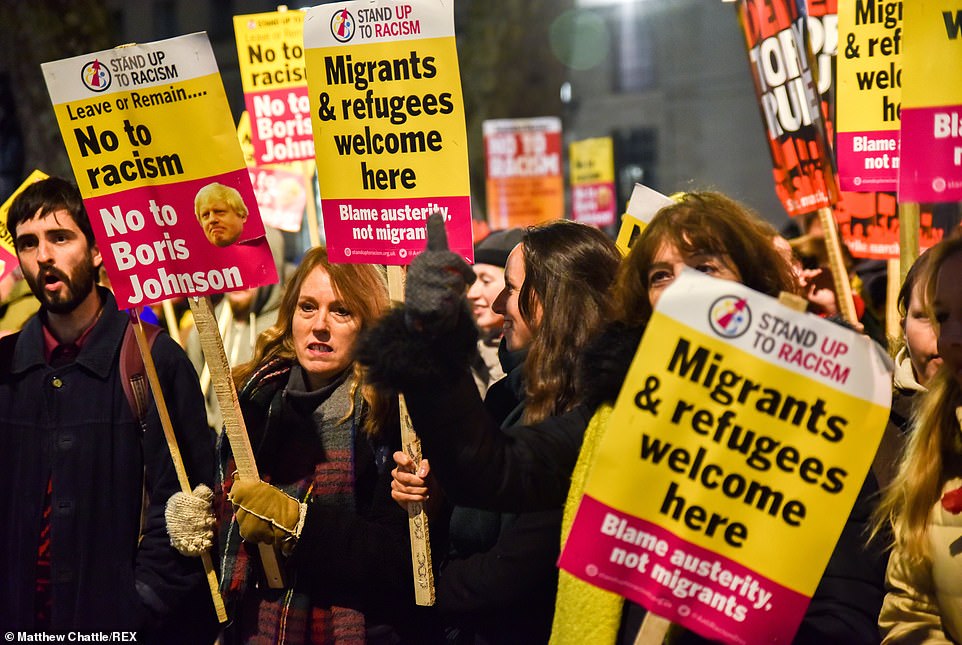 Other placards included slogans such as ‘blame austerity, not migrants’ as dozens took to the streets outside Downing Street this evening 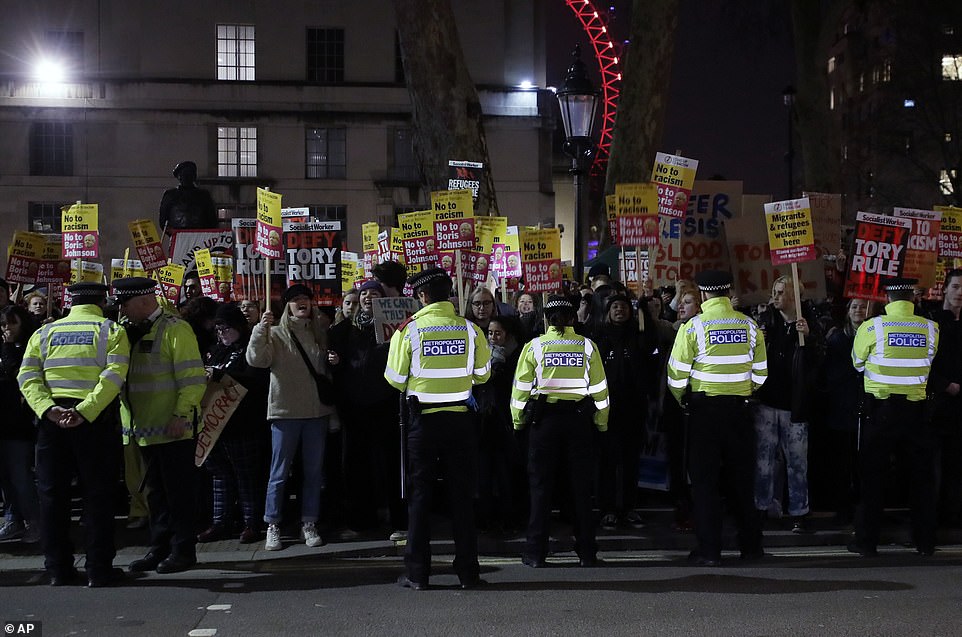 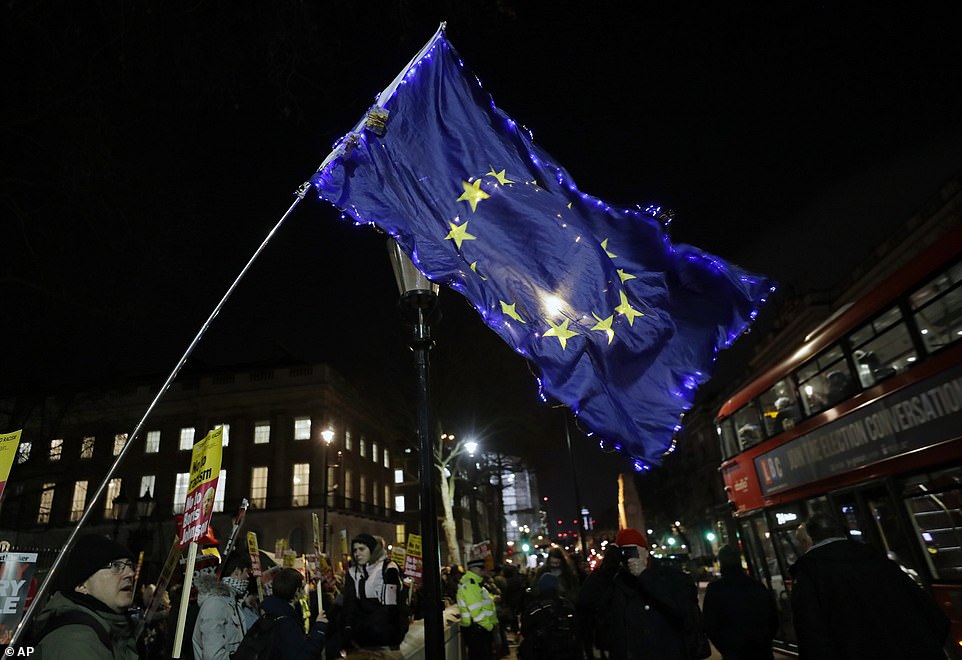 Mr Johnson has now promised to get Brexit done by the end of January, but these protesters waved European Union flags outside Downing Street in the hope of positive relations with the Union

After the SNP took 48 of the 59 seats in Scotland, the First Minister said she would next week set out a ‘detailed democratic case’ for a transfer of power to Holyrood to enable a referendum to be ‘put beyond legal challenge’.

But the most striking aspect of the results was the collapse of Labour’s hitherto impregnable ‘red wall’ with seats across the North and Midlands which had not voted Conservative in more than a century falling to the Tories.

It represented the party’s worst general election performance since 1935, with veteran left winger Dennis Skinner in Bolsover and Tony Blair’s old seat of Sedgefield among the casualties.

At an early morning victory rally in Westminster, Mr Johnson said he was ‘humbled’ that voters who had never before voted Tory had chosen to put their trust in him.

He acknowledged that in order to retain their support the Conservative Party would have to change some of its priorities.

Mr Corbyn, meanwhile, expressed ‘pride’ in his party’s controversial left-wing manifesto, blaming their losses on Labour Leave voters turning to the Conservatives or the Brexit Party.

‘This election was ultimately taken over by Brexit,’ Mr Corbyn said.

‘My whole strategy was to reach out beyond the Brexit divide to try and bring people together.’

He said that it would now be for the party’s ruling national executive to set the timetable for a leadership contest, some time in the early part of 2020.

‘I am quite prepared, and I was elected to do so, to lead the party until that takes place,’ Mr Corbyn said.

His comments infuriated some Labour MPs and defeated candidates who said he should go immediately.

Veteran MP Dame Margaret Hodge said Labour had become the ‘nasty party’, with anti-Semitism allowed to flourish, and that the result represented a rejection of the entire Corbyn ‘project’.

‘People just didn’t trust the economics, the confetti of promises that was thrown at the public without any clear and honest way they were going to be paid for,’ she told the BBC.

‘Labour has become the nasty party. I am one of the victims of that with the anti-Semitism.’