It had been a long night for politicians and analysts who had stayed up to watch the results filter through in the General Election.

So it’s no surprise that one guest on ITV’s Good Morning Britain today appeared to take the chance to have a few seconds of shut-eye while others spoke.

Former Labour MP John Mann had just condemned leader Jeremy Corbyn on the programme as the party headed for its worst result since 1935.

But as host Susanna Reid spoke to former Conservative and Liberal Democrat MP Heidi Allen, Baron Mann appeared to shut his eyes for a short period.

It came minutes after he had told the programme: ‘I’m angry at Corbyn, I’m angry at Keir Starmer. I spent 18 months privately and publically telling the Labour Party what the people want is ‘get on with it’.

‘Slightly different slogan to Boris Johnson’s, but same thing, and they voted accordingly, and there’s not the slightest surprise in what’s happened.

‘Susanna, you call him a leaver, what the people out there in places like Bassetlaw call him is a loser. Every doorstep – Corbyn, we’re not voting for Corbyn, or through gritted teeth, we’re voting labour, but it’s not for Corbyn. 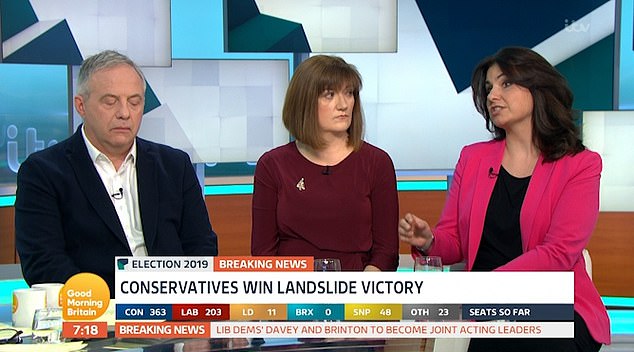 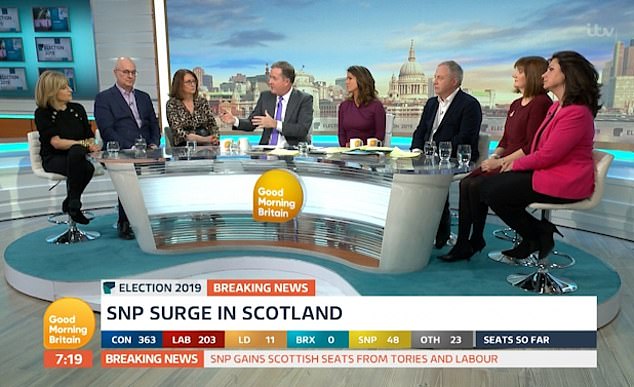 ‘And of course large numbers said no, we’re shifting. There’s a lot of deluded people at the top of the Labour Party.’

Baron Mann, who is now a peer, also tweeted today: ‘Every doorstep, every workplace for the last 18 months has rejected everything to do with Corbyn, Corbynism and the cult of Corbyn. They can’t say they weren’t warned. Repeatedly.’

He was elected the Labour MP for Bassetlaw in Nottinghamshire at the General Election in 2001 until he stood down in October this year.

The married father-of-three also resigned from the Labour Party and is now an independent anti-semitism adviser to the Government.