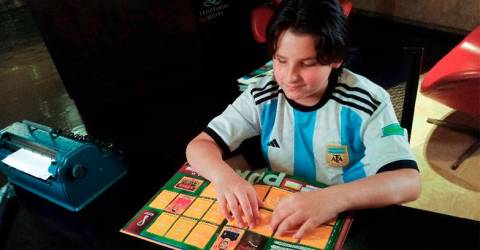 VENEZUELA: A blind 12-year-old Venezuelan soccer fan has found a way to participate in the craze of collecting World Cup football stickers, by adding Braille to them.

Sebastian Filoramo, from the western city of Barquisimeto, began the initiative with the support of his parents and school teacher a few months ago by buying and labeling the album stickers with a Braille machine.

“My dad is a genius, he thinks of everything,” Filoramo, who lost his sight as a baby, said. “He told me: ‘Do you want to fill the album? Then let’s get it adapted.’”

While customizing the collectible stickers, Filoramo said he also used transparent adhesive paper to write the names and numbers in Braille, and then his father helped him with the glue on the edges of the squares to guide him to put the players’ cards inside the album.

To complete the album for the Qatar World Cup, which kicks off on Nov 20, some 600 stickers are needed.

“Sebastian always comes up with brilliant ideas,” said Yohelis Nelo, the youngster’s teacher who helped him label the cards.

“I agreed to help him, but I told him we had to finish the homework first,” she joked.

Filoramo, wearing an Argentine national football jersey, said he still had “a lot of cards” to check off.

His most exciting moment as a collector to date was when he finally found Argentine player Lionel Messi’s image among a pack of the stickers. – Reuters