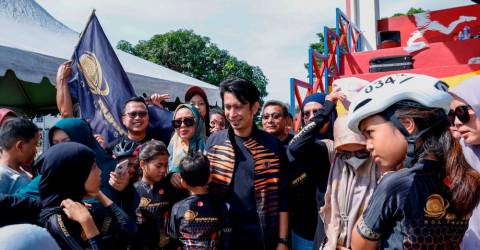 He said this is important to identify the cause of the problems that often plague club managements and football sponsorship in the country.

“This may be a method of finding a better solution and give room for all parties who are facing financial problems, in particular to resolve their salary debts to the players,“ he told reporters after officiating the Melaka Open Speed ​​Skating Challenge 2022 at the Tun Fatimah Stadium here today.

He said this in commenting on the issue of player salary arrears that has plagued Melaka United FC as reported by the media recently.

He said the Ministry of Youth and Sports (KBS) is already aware of the problems affecting the players and management of Melaka United FC, but so far there has been no detailed discussions with the club’s management (on the matter).

“We will evaluate this matter. At the same time we will try to understand the problems they are facing including by holding meetings and discussions with the team’s management,“ he said.

He said that not only MUFC, but several other football clubs are struggling with a similar dilemma and that KBS will work together with them to find solutions.

“However, KBS does not have the absolute authority to direct or set any resolution provisions and lay down a timeline to resolve it since club management is private or under the state government.

“This matter has to be thoroughly evaluated but we believe there will be a best way out for every team including Melaka United FC and efforts need to be made to ensure the issue of salary arrears does not recur,“ he said.

He also dismissed the high salary factor as the cause of clubs’ management being overburdened because each player’s salary scale is given based on the assessment of performance and the abilities of the clubs are different.

Previously, the media reported that the Mousedeer squad players were facing a salary arrears crisis and the matter is still going on until now. – Bernama